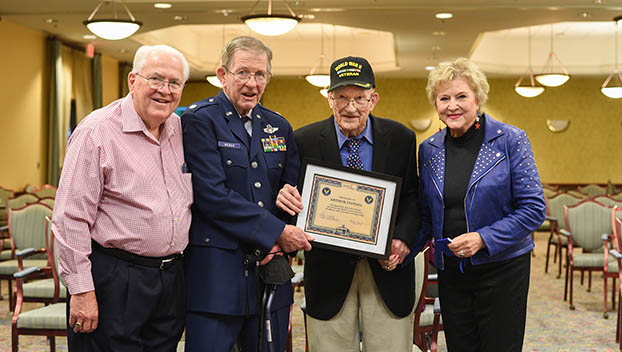 Stovall is the last living World War II Veteran in the community. He’s also among the country’s last few World War II veterans. More than 16 million Americans served in the U.S. Armed Forces during World War II, and now, there are about 167,284 Veterans alive today.

Having enlisted in the U.S. Air Force, Stovall was stationed at Brookley Field in Mobile, Alabama. He then married his wife, Vilva Brown, before being sent to serve in the Pacific Theater in Australia. He specialized in overhauling radial engines on bomber aircraft- an essential role in the battle against Axis Power Japan.

Along with dozens of other residents’ family members, Stovall’s daughter and son-in-law, Terri Glen Bagby, were in attendance to celebrate Terri’s father as he received a framed certificate of appreciation for his service in the last World War.

Alan Beuscher, Wesley Village’s Vice President for Communications, said a performance from the West Jessamine High School Concert Choir made the ceremony “extra special.” With teacher Brett Burton, the choir sang acapella renditions of “The Star Spangled Banner,” “My Old Kentucky Home,” and “A Salute to the Armed Forces Medley” with piano.

“It has always been – and always will be – a special honor for us at Wesley Village to honor the many veterans who live among us – especially someone like Art, who is one of the last of what we call ‘The Greatest Generation.’” Beuscher said. “It is also a special privilege and pleasure for us when we can bring generations together at our community center (as with the WJHS Concert Choir) – so that young people can see the special value we place on our seniors and our seniors can be encouraged by their most uplifting energy and enthusiasm!”