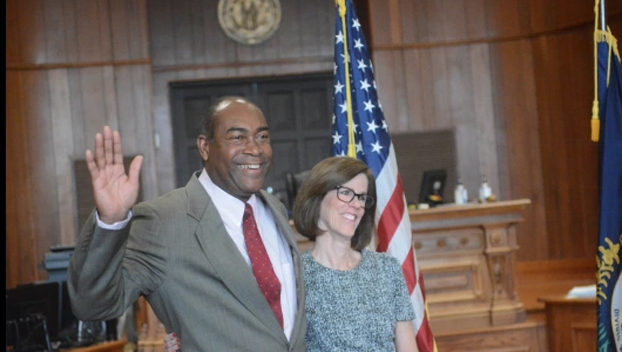 New District 22 Senator Donald Douglas and his wife Carol during his inauguration in November. (Photo by Dillan Combs)

The past year has been one filled with good news and bad; fun times and hard times. As we look back on 2021, The Jessamine Journal would like to share with our readers the top stories of 2021 based on visits to our website, https://www.jessaminejournal.com/

As of Dec. 26, 2021, we have welcomed nearly 333,092 visitors to our site. While there, they have read stories and viewed photographs about local government news, area crime, sports, and more.

Below is a listing of the top 10 stores of 2021, along with the number of visitors who looked at each story on our website, and a brief portion of that story.

1. Nicholasville woman charged with incest, rape (Jan. 29)
Web Page Visits – 48,371
Publication date: Jan. 29, 2021
A Jessamine County woman was arrested during the weekend after allegedly having intercourse with a male child in 2019.
Brandy Perkins, 38, of East Maple Street, was arrested by sheriff’s deputies on a criminal complaint issued in November 2020. According to the complaint, Perkins had intercourse with the boy in May 2019 when he was 10 or 11. The complaint listed two incidents, one involving oral sex and intercourse and another of intercourse.

2. Sen. Tom Buford remembered as loyal, highly-effective lawmaker who got things done — with kindness
Web Page Visits: 368
Publication date: July 14, 2021
Sen. Tom Buford, a Republican from Jessamine County, passed away July 6 at age 72. After representing the 22nd District in the Kentucky Senate for three decades, the state senator was known for taking on some tough issues with his vastly extensive legislative experience. He represented Garrard, Jessamine, Mercer and Washington Counties, along with part of Fayette.
As one of the longest-serving members of the Kentucky Senate, Sen. Buford served as Majority Whip, Minority Caucus Chair and as chair of the Senate Banking Committee. He was a past member of several joint committees, including the as Child Welfare Oversight Committee, which provides oversight to Medicaid, and a committee dedicated to health, welfare and family services.

3. Police investigating drive-by shooting in Wilmore
Web Page Visits – 4,574
Publication date: Jan. 19, 2021
Wilmore Police are investigating a drive-by shooting that occurred in the Woodspointe subdivision around 4:30 Sunday afternoon.
According to Wilmore Police Chief Bill Craig, the tenant of the rental home, Jessica Robertson, told officers a silver Dodge pickup truck with two occupants was parked in front of her residence and drove off. She then went to her mailbox, and the truck came back. The shooter, a black male with dreadlocks, fired about five shots into the house.
She said she didn’t recognize the subject and didn’t know whether he was shooting at her or the house. Neither she nor anyone else was hit or hurt.

4. Wilmore Elementary names new head principal
Web Page Visits: 1,347
Publication date: June 8, 2021
Veteran educator Monica Thompson has been selected as the next head principal at Wilmore Elementary School. Thompson will officially take over on July 1, 2021, following the retirement of Dawn Floyd, who is stepping down after eight years at the helm.
“Monica stood out among a field of very strong candidates. With both classroom and administrative experience, she has proven to be an effective instructional leader and also just as importantly, an exceptional servant leader. Monica is a visionary with a student-centered perspective and I believe that our Wilmore Elementary family will continue to grow and flourish under her leadership,” said Superintendent Matt Moore.
Thompson brings nine years of classroom teaching experience and another three years in administrative leadership to Jessamine County. Most recently serving as Assistant Principal at Julius Marks Elementary in Fayette County, KY, she was the Professional Growth and Effectiveness Coach, leading the effort to collaboratively strengthen instructional programs and practices.

5. Bobby Day Wilson, Wife Anna, lift city-county life, progress
Web Page Visits: 141
Publication date: Dec. 23, 2021
Versatility marks the interesting career of Nicholasville native Bobby Day Wilson. His wife of 56 years, Anna Alexander Wilson, is a worthy compliment in all family endeavors. They met at Transylvania University and married in 1965. That was two years prior to her graduation with a double degree in English and History. He earned his diploma in 1964 in Economics and advanced to Georgetown University for a masters in Education.

6. Couple charged with abuse of corpse
Web Page Visits: 2,013
Publication date: Jan. 27, 2021
A Nicholasville couple have been arrested and jailed after city police found the naked body of a dead man in a “herbie curbie” inside their home at 216 Strawberry Lane Tuesday morning.
Clay Phillips and Tawna Miller were charged with abuse of a corpse and tampering with evidence. Sgt. Kevin Grimes, public information officer for the Nicholasville Police Department, said the deceased, who has not been identified by the Coroner’s Office, had asked if he could “crash on their couch,” according to the couple, and so they let him sleep there. Later, they woke and found he had died during the night, so they brought the trash bin inside their home, unclothed him and left him in the living room.

7. Dr. Donald Douglas inaugurated as district senator
Web Page Visits: 137
Publication date: Nov. 18, 2021
Dr. Donald Douglas (R) was sworn in Thursday as the state senator for District 22, which includes Jessamine, Mercer, Garrard, Washington, and part of Fayette counties.
“I feel honored to have won the election,” Douglas said. “I feel the people in District 22 are some of the greatest people in the world. I think they are dedicated, I think they love this area, I think they’re wonderful Americans, and I think they were looking to pick someone who they thought could bring this all together.”
The district was last represented by the late Tom Buford. Dr. Douglas defeated Helen Bukulmez (D) and Sindicat “Sid” Dunn (independent) with more than 70% of the vote during the 2021 special election.

8. Jessamine Treasurer Tami East retiring after more than 20 years
Web Page Visits: 175
Publication date: Nov. 17, 2021
After more than two decades of service as Jessamine County Treasurer, Tami East will retire in spring of 2022.
East’s final day as treasurer will be March 31.
“I plan to take the month of April off to enjoy myself, and then see what other opportunities come my way,” said East, who has balanced the county’s books since 2001 as treasurer.
The county is searching for someone to take over East’s position.
East started to work for the county 23 years ago because of her friendship with the previous treasurer, the late Dorothy Ward. Back then, East was working at Central Bank – Jessamine’s county bank. It was where Ward conducted her banking, and through business, she and East became friends.

9. Police: Man stole 14 bags of frozen shrimp
Web Page Visits: 2,061
Publication date: Feb. 5, 2021
Police charged a Lexington man this week after allegedly stealing nearly $200 in frozen shrimp.
According to Nicholasville Police, officers were called to Kroger on Brannon Road around 2 p.m. Tuesday after employees witnessed a man hiding bags of frozen shrimp in his jacket. The man then left the store without paying for the shellfish.
Raymond L. Gardner, 52, of Lexington, was charged with theft by unlawful taking under $500 and second-degree fleeing or evading police.
During the incident, the officer recovered 14 bags of frozen shrimp, valued at $195.72, according to the arrest citation.

10. Woman dead after crash on Nicholasville Road
Web Page Visits – 5,087
Publication date: Nov. 16, 2021
A woman involved in the collision on Nicholasville Road Friday morning has been pronounced dead.
Nicholasville Police said Naomi Niles, 65, reportedly died at the University of Kentucky hospital, where she was taken after the accident. The Fayette County Coroner lists her cause of death as blunt-force trauma.