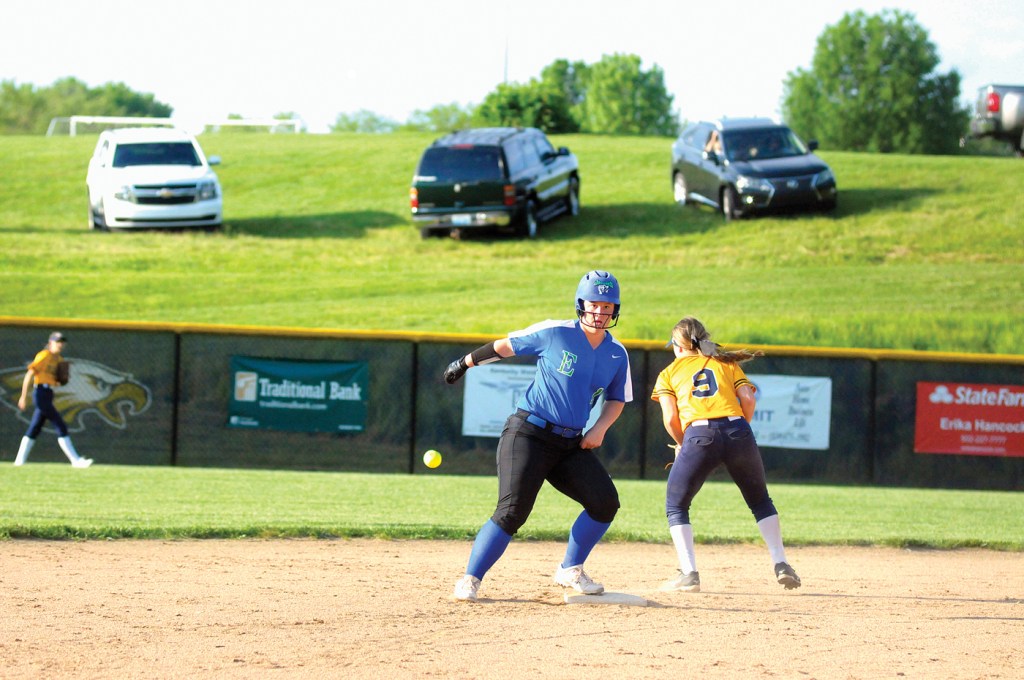 East Jessamine's Mallory McDowell stops at second base after hitting a double as Franklin County shortstop Madison Parido (9) waits for the throw from the outfield during Tuesday's game in Frankfort. Franklin County won 4-1. (Linda Younkin/State Journal)

By Linda Younkin
For The Jessamine Journal

Franklin County’s softball team did just what it wanted to do Tuesday, jumping out to a 2-0 lead in the first inning over East Jessamine.
The Lady Flyers bided their time after that before scoring two more runs in the sixth inning for a 4-1 win at Sally Gaines Field.
“I was pleased,” FCHS coach Tracy Spickard said. “We came out strong and fast in the first inning and put two runs on the board, and we put pressure on them. We forced them to play the glove.”
Mallory McDowell and Haylee Stansbury each hit a double and single for East, and Madison Stinnett had a single.
Kaylee Terral pitched.
Franklin County scored its first two runs on a walk, a single by Madison Parido, an error and a groundout.
East Jessamine (17-8) scored its run in the fourth inning on back-to-back doubles from McDowell and Stansbury, and the score stayed 2-1 until the sixth inning.
“We made adjustments,” Spickard said. “We saw the ball better, and we hit better pitches in the sixth inning. That allowed us to get the barrel through, put runners on base and produce.”
Shelby Rhoades led off the FCHS half of the sixth with a double, and Sophie Charles came in to run for her.
Gracie Mika followed with a double, scoring Charles, and Mika went to third on a groundout.
A single from Layah Fox scored Mika, and the Lady Flyers loaded the bases with a single by Jaylin Muravchick and an error.
A strikeout and fly ball left the runners stranded.
FCHS finished with eight hits — a double and single from Parido, doubles from Rhoades and Mika, and singles from Shelby Wilhite, Emma Story, Muravchick and Regan Gregory.
Braylei Pylant pitched a complete game for the Lady Flyers, giving up five hits and one run while striking out five.
“You always want to come out strong and put runs on the board first,” Spickard said. “They’re a good team, and they’re going to contend for the 12th Region title like they do every year.”