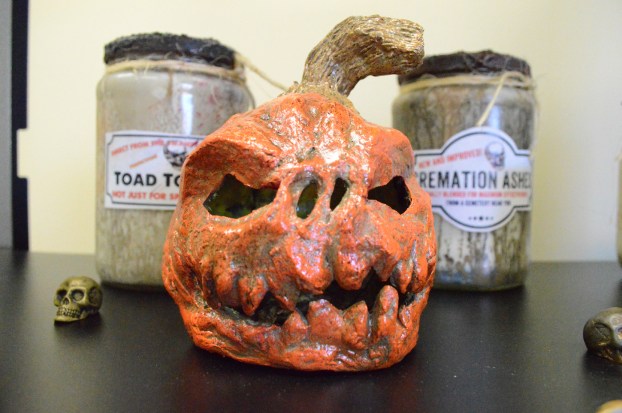 While some may enjoy the trinkets and creepy decorations for Halloween once a year, one Nicholasville man creates them all year long.

“I’ve loved Halloween since I was a kid,” Dienhart said.

He recalled one of the first Halloween items he created was a Pac Man costume he made out of cardboard boxes.

“I guess thats when the bug bit me,” he said.

Now, Dienhart makes custom designed Halloween props and decorations all year round for his online store, Halloween 24×7. He has created items ranging from a 64-feet long cemetery fence complete with a full-sized coffin to animatronic zombies and ghosts.

Two years ago, he and his family created dead bodies modeled after himself, his girlfriend and his children to hang on the cemetery fence. He and his daughter were  inspired by a scene from the movie “World War Z.”

Though Dienhart said his most popular item on Etsty is the hand-aged jars with various labels such as “Bat Wings” and “Dragons Blood,” his favorite creation is his most recent one — baby doll head candle holders.

Dienhart does a process called cold casting. He dusts the inside of the mold with metal powders such as iron, and then pours resin into the mold, which adheres to the powder. Once it’s finished, and the material has dried and hardened, he ages the metal with vinegar, salt and peroxide.

The time it takes to make each baby doll head candle holder varies based on the materials used.

For the past six months Dienhart has created several small casts. He began doing the bigger casting and making his own molds, about two months ago. He said his first baby doll head candle was a $100 learning experience. He only got two candle holders from his first batch of mold. Now that he has experimented with the materials, $70 worth of mold should allow him to create around 100 to 150 baby doll head candle holders.

When Dienhart is not creating Halloween treasures, he has a full-time job as a project manager at TwinSpires, a Churchill Downs company.

Dienhart’s work has been featured at three different gallery walks, High on Art and Coffee on High Street in Lexington and the Thriller and Halloween Parade in Lexington.

He also walked ScareFest in a costume he made called “Mr. Handsy.”

His next showing will be at the Thriller and Halloween Parade in Lexington.

Editors note: The following changes were made to this article. Mr. Dienhart’s name was misspelled as “Dinehart.” Also his family was involved in the inspiration and making of the dead bodies they hung on the cemetery fence.

Photos by Trina Dunaway The “Trinkets by Jules” tent was shown off by Julie Johnson, a resident of Wilmore. Buck... read more