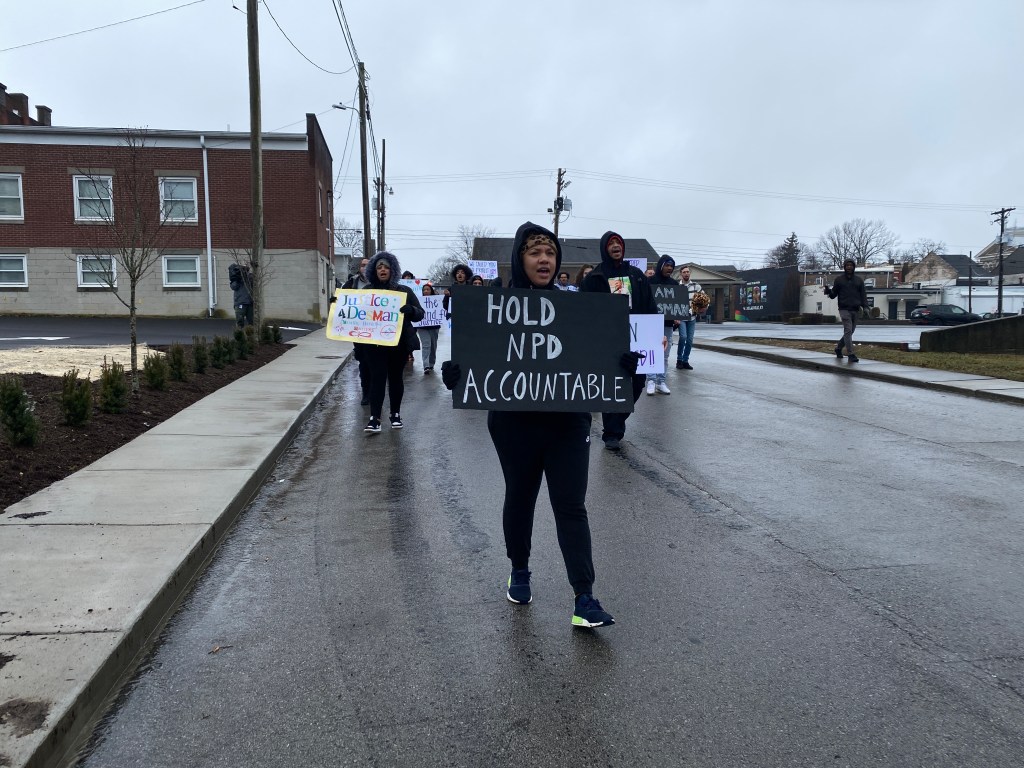 A protester carries a sign pledging to hold the Nicholasville Police Department accountable for the death of Desman LaDuke. (Photo by Gillian Stawiszynski)

Family, friends, and protesters returned to Clint Hayden Park for Desman LaDuke, the 22-year-old who was shot and killed during a mental health crisis by officer Joseph Horton from the Nicholasville Police Department.

Since the first protest, activists and organizers Sarah Williams and Jay Calhoun said they would keep coming out, rain or shine. They’ve followed through on that promise. The fourth and most recent protest on Sunday, Jan. 22, was a cold and dreary-weather day.

Just before the previous protest on Saturday, Dec. 3, the family and the organizers received the policies that govern the Nicholasville Police Department and its sworn officers, as well as officer Horton’s personnel file.

This protest marked four months since LaDuke was killed on Oct. 22, and the group hasn’t received anything since December 2.

“We’re still waiting on Kentucky State Police (KSP) to come out with the findings of their investigation,” Williams said

She also said they’re also waiting for the videos, including body cam footage, so that “we can move forward in holding the appropriate people accountable.”

But KSP has refused the organizers’ requests because the investigation is still ongoing.

“It’s like their favorite thing to hide behind is that there’s an open investigation,” Williams said. “I can’t imagine what else they need to investigate when it has been four months. We need answers, the community needs answers, and we deserve to move forward to make sure this situation is rectified and doesn’t happen again.”

“Four months for a two-hour situation,” Marks said, “They’ll put that kind of work into something when two hours is all they could give that day to Desman.”

On Dec. 20, The Lexington Herald Leader’s Taylor Six reported on her conversation with Michael Abate- a first amendment and media law attorney. She asked him about the Nicholasville and state police department’s refusal to provide copies of the bodycam footage, 911 call transcripts, and photographs from the scene of the shooting.

In response to Six, Abate said, “They have been sanctioned multiple times in recent years by Kentucky courts for claiming that an entire investigation file can be withheld solely because of a pending investigation — just as they are doing in this case.” Abate continued, “That is not the law, but KSP keeps making that argument anyway, even though it keeps losing in court and declining to appeal.”

Marks said that the holidays have been challenging without her nephew, LaDuke.

The next step, according to Williams, is to organize the greater Jessamine County community. On Saturday, Jan. 28, at 2 p.m., organizers will hold a community meeting via Zoom. It will be posted on www.tinyurl.com/desmanladuke.

“Whoever wants to join in can because that’s part of the marathon portion that we talked about when we held our first protest. We have to organize the community, and we also have to lobby local politicians and stakeholders to get the changes that we seek,” Williams said.