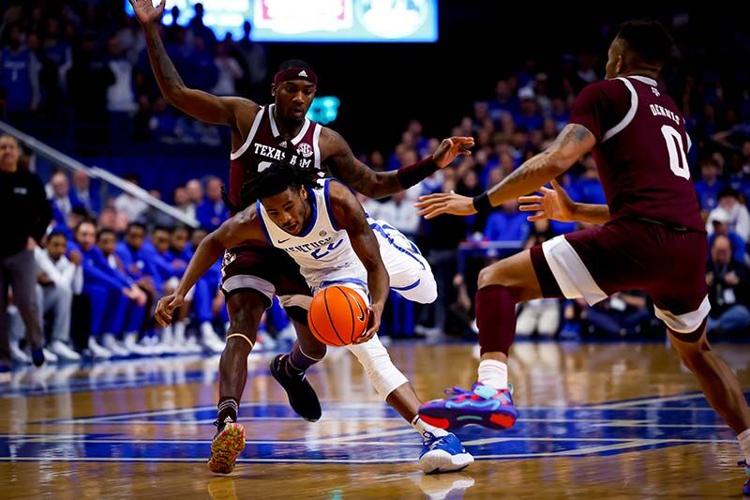 Kentucky took a proverbial punch from Texas A&M and fought back, resulting in a 76-67 win over the Aggies Saturday.

The loss was the first in seven games for the Aggies, who had opened with five straight victories to open play in the Southeastern Conference.

“The job that Buzz (Williams) has done, to play disruptive basketball, to take out almost everything we’re trying to run and to mold his team – they had won seven in a row,” Kentucky coach John Calipari said. “They were beating everybody, and they beat a couple of teams by 25 (points).”

Suddenly the Wildcats have gone from vulnerable to unbeatable. In a span of one week, the Wildcats (13-6, 4-3) have won three straight in a turnaround that began at Tennessee last Saturday. A players-only meeting and a message from Calipari before the win over the Volunteers served as a wake-up call.

“I told them (in Knoxville) if I have to drag you over hot coals to where you’re supposed to go, we’re breaking through, so you can do it, or I’m dragging you, but we’re going to do this,” Calipari recalled. “I’ll be honest with you, as a coach, it’s way easier when they drag me. It’s way easier. The other one just beats you down.”

The recent resurgence has returned Kentucky to relevance in the conference. Lineup changes, coupled by routine changes off the court, helped revive the Wildcats. Last week Calipari took away the team’s cell phones and other tech tools before the surprise victory at Tennessee.

This time, the Wildcats stayed overnight at the Hyatt Regency and did pre-game workouts on Friday at Rupp Arena to bring the team closer before game day. It was a practice late Kentucky coach Eddie Sutton routinely used during his tenure.

The techniques and schemes seem to be working for Wildcats. Coming off Oscar Tshiebwe’s career outing in an 85-71 win over Georgia Tuesday night, the Wildcats took a different approach to gun down the Aggies. Kentucky’s guards — CJ. Fredrick, Cason Wallace, and Antonio Reeves — provided the bulk of the scoring for Kentucky, especially behind the arc. The Wildcats attempted 32 3-pointers, the most in more than a decade, and made 11 of those, with Reeves knocking down a season-high five in the narrow victory.

“They were all open (shots), Calipari said. “You’ve got to shoot them.”

Reeves did just that, and made them, too.

“Some of them were open, so to be able to take my time and just relax when I was out there, and it just ended up falling,” he said. “My three ball was going in, my teammates were looking for me down the stretch, and a couple shots went in for me.”

In addition to his shooting, Reeves provided the late-game heroics with a 3-pointer that gave the hosts the lead for good at 56-53 at the eight-minute mark. He also made a pair of jumpers in the lane in the final two minutes to help seal the deal.

“Those two baskets late, you need somebody to just go get a basket, and he did it,” Calipari said. Reeves, Wallace, and Fredrick combined for 46 points, with Reeves leading the Wildcats with 23 points, Fredrick scored 12, and Wallace ended up with 11 points to go with four assists. Jacob Toppin had 17 points, while Tshiebwe finished with seven points and 17 rebounds despite playing just 10 minutes in the first half because of foul trouble.