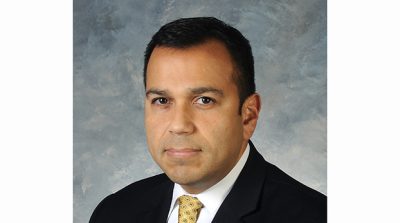 The  special election to replace Republican state Sen. Ralph Alvarado of Winchester will be held May 16, the day of the statewide primary for governor and other statewide offices.

A physician, Alvarado will become commissioner of the Tennessee Department of Health, Jan. 16. Republican Gov. Bill Lee appointed him to the post in November.

Last Friday, Alvarado tendered his resignation from the Senate and bid his Kentucky colleagues an emotional farewell, while enduring some good natured ribbing from them for his intense work habits.

The first Hispanic member of the Kentucky legislature, Alvarado spoke of his late father, an immigrant from Costa Rica.

“My father loved this country. He instilled that pride in his kids. He was an immigrant who worked very hard to support his family. He expected success and a strong work ethic from his kids. Hispanic homes are family–centered, God–centered and we work very hard; and we are very passionate.

“I love solving problems. …  Work is play for me. When I wake up, my mind clicks and I can’t really turn it off until I go to bed. When I am in social gatherings with many of you, I pursue discussions about policy. Some of you have said, ‘Ralph, let it go. We’re not on the clock.‘ The problem is that I’m always on the clock. I have a really hard time turning it off. It’s both a blessing and a curse.”

Alvarado unseated incumbent Democrat R.J. Palmer to win his Senate seat in 2014.  He was Gov. Matt Bevin’s running mate in his unsuccessful 2019 reelection campaign and also a primetime speaker at the 2016 Republican National Convention.

The Kentucky Lantern is an independent, nonpartisan, free news service.