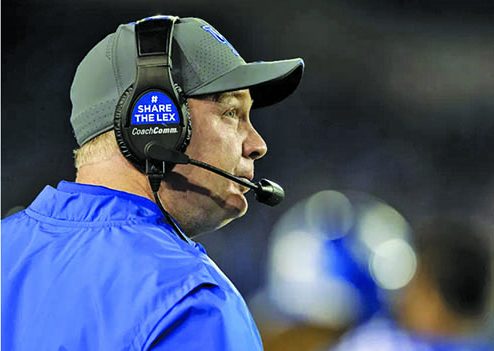 Kentucky football coach Mark Stoops has plenty of options on the table regarding his next offensive coordinator.

Stoops, who fired Rich Scangarello last week, said he “felt the change was needed or I would not have done it.” Scangarello spent one season with the Wildcats after replacing Liam Coen, who took a similar post with the Los Angeles Rams.

“I’m very excited about where this could lead,” Stoops said Monday. “I’m in the middle of talking to several people. I had a great conversation with a potential candidate (Sunday). I’m going to meet with another one here this week. I’ve already spoken to several others, and so I feel like there’s some very good options out there.”

The Kentucky coach added that he’s “not going to limit myself” and is being patient when choosing his sixth offensive coordinator.

“We’ll see where it goes,” he said. “I’m optimistic (and) I’m excited. Each time this position seems to open up, there’s even more and more interest in the job, which is a good sign to me. “

The goal, Stoops said, is to score points, an area the Wildcats struggled in at times this season, especially in the red zone. He added the complementary football remains a priority, and he is seeking balance within the team’s offense.

“Balance is important (and) being physical is important,” he said. “It’s important to me. I think it’s who we are — it’s an identity.”

Stoops also is looking for a running backs coach and special teams coordinator after John Settle was let go after two seasons. Stoops appears to be close making the final decision on that position.

“I have a person in mind I’m gonna hire that’ll be both running backs and special teams,” he said.

While hiring two new coaches is high on his list of priorities, Stoops also is keeping a close eye on his roster, with some players declaring for the transfer portal, while another — quarterback Will Levis – will be making a decision whether or not to play in the Music City Bowl.

“We’ll get together, I would imagine, real soon,” Stoops said. “He’ll let me know.”

The Kentucky coach added the Wildcats are “holding court” within the transfer portal and is being patient with his search for a coordinator.

“There’s no panic here,” he said. “You’ve got to have some urgency about it, but no panic, you know, and not I’m not going to rush things. It’s vitally important that we have the right guy. You have to get the right person, you know, rather than rush just to get one player or two. We’re staying steady in recruiting. I think we’re going to do well in the portal, and, you know, I don’t want to panic there. I want to get the right guy.”

Looking ahead, Stoops said he has the tools to be successful regardless of what the future holds.

“I think we have good pieces (and) I don’t think we’re far off,” he said. “I think we got cut short in a couple of spots this year. And I think we need to address that and get back to work because we’re not far off — you’re still a few plays away from winning one and two more. You’ve got to look at those things.”