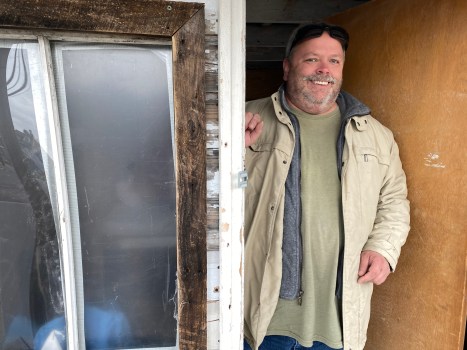 Johnny Templin recently spent a week in a shed on the front lawn of the public library to raise awarness about homelessness. (Photo by Gillian Stawiszynski) 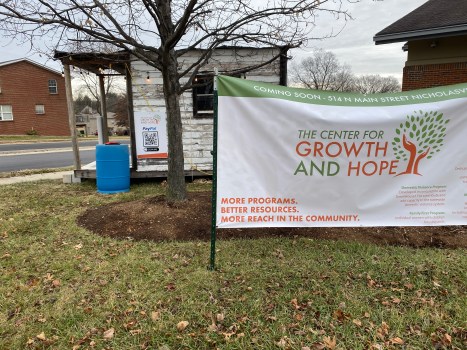 The shed was little more than 70 square feet. (Photo by Gillian Stawiszynski)

Johnny Templin said he typically gets two to four hours of sleep at home with the thermostat set to around 65 degrees Fahrenheit. He called himself more warm-blooded than others, but the powerful winds and 20 degrees Fahrenheit nights in an uninsulated shed persevered.

Templin still had a space heater, a laptop, water, and snack foods in his shed. He only had a little else, with a bed that could not fully fit his six-foot-stature.

Soon after the first night, Templin asked a friend and partner at JCHC to stay in the shed while he traveled to Walmart for long johns.

Templin is the director of the Jessamine County Homeless Coalition (JCHC) and stayed in the shed to raise awareness of homelessness and raise money for the coalition’s new shelter. In addition, he invited the public to visit him for porch chats about homelessness and hosted some on the JCHC Facebook page.

The JCHC runs programming and emergency housing at the shelter on Maple Avenue. However, Templin is working with his team to build a new shelter. The Center for Growth and Hope will be a larger and longer-term homeless shelter with expanded services that the emergency shelter does not offer. It will be the only one of its kind in the County.

The new shelter will have a capacity of about 90 people, and its new services will serve veterans, women with children, people with addictions, and survivors of domestic abuse.

So far, the JCHC received about $8,900 during Templin’s week in the shed.

He also received many meals from different community members. He said the only thing he missed was fruits and vegetables.

Templin said he believes the public perception of unhoused people is on both ends of the spectrum.

“We’ve got a community of warm-hearted people that will just give until it hurts, most of them in ways we never see,” Templin added that he’s experienced some people who feel quite the opposite. “But the bottom side of that is the people that, no matter what, see it as an enabling type of thing. This gets a small segment even more agitated if you will.”

Although he recognizes that his experience in this shed isn’t a completely accurate representation of homelessness, Templin said he wants to raise awareness around the issue and fight the stigma against it.

Templin has faced housing insecurity twice in his life. He said his parents often moved around and were constantly receiving eviction notices. Eventually, his older brother, a restaurant manager, took him and his parents into his 1400-square-foot townhouse. He also took in their two other brothers- one with a wife and two kids.

There was another short stint when Templin was homeless with his late wife and children in the late 1990s. He stayed in the hotel his father worked at for $20 a night. His family had no car, and his wife was pregnant. He would donate plasma and work the third shift for $3.75 at Thorntons to find a permanent home for his family.

If you’re interested in JCHC services, head to www.jchcky.com. If you would like to donate to JCHC, you can use Paypal at www.paypal.me/jchcky or donate in person at 218 East Maple Street in Nicholasville or call (859) 813-0233.

The Jessamine County Homeless Coalition is looking for volunteers for their Community Christmas Dinner on Wednesday, December 22. If you’re interested in donating or serving, sign up at this link www.cognitoforms.com/JessamineCountyHomelessCoalition/ChristmasDinnerVolunteers.