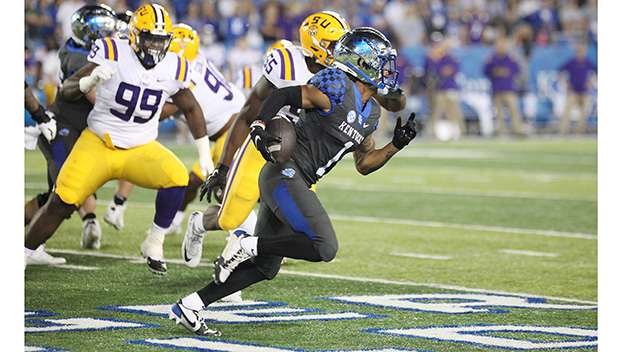 Just when Wan’Dale Robinson finally was silencing any remaining doubters he might have had, the former Kentucky high school standout had his first NFL season come to an abrupt end.

Robinson was a star at Western Hills High School when he had over 8,500 yards and 118 offensive touchdowns and then had a record-setting season at UK in 2021 after transferring from Nebraska. Robinson had 194 receptions for 1,334 yards and seven touchdowns at UK.

The New York Giants used a second-round pick — 43 overall in the draft — to obtain Robinson and against Detroit on Nov. 20 he was targeted 13 times and made nine catches for 100 yards — his first NFL 100-yard game.  However, on his ninth catch early in the fourth quarter, Robinson tore the ACL in his right knee and is out for the season.

Robinson had suffered a strained patella in his first NFL game and also had been slowed by a hamstring issue. The two injuries caused him to miss four games but he still had 14 catches for 127 yards going into what turned out to be his final game of the season.