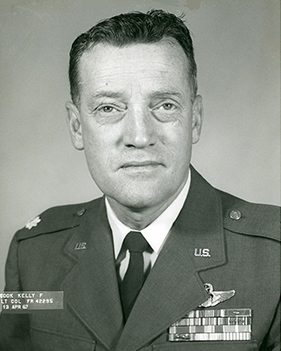 Three-war veteran Air Force Colonel Kelly Francis Cook was reported as missing in action after his plane was shot down on November 10, 1967.

Col. Cook was born and raised on a small tobacco farm near Keene, Kentucky, in 1922. But because he never moved back to Kentucky after high school, his hometown has never formally recognized him. Charging Forward for America set up a program to change that recently.

Charging Forward for America is a nonprofit organization that does several veteran-related activities, especially focusing on prisoner of war and missing-in-action awareness. The group worked for 6-8 months to plan the day.

Some of the program’s main organizers were Kelly Shehan, the organization’s chief operating officer and director of special programs, and Patrick Caskey, who Shehan said was “instrumental” in getting everything set up for the colonel’s recognition and bringing two of his children, Col. Cook’s oldest daughter, Nancy Collins and his youngest son, Daniel Cook down to Kentucky.

The program started at Col. Cook’s alma mater, Bryan Station High School, with a ceremony to recognize him. The school’s Junior ROTC program, with Charging Forward for America, also presented a plaque to the Cook family.

“I could tell the kids in the JROTC unit was a little nervous, but they did a great job. It was nice seeing a group of young people doing something to honor someone who’s not even anywhere close to their lifetime or anything, but they felt it special to honor someone who was in the Air Force and went to their school,” Shehan said.

Having served in three wars, receiving almost three degrees, having six children, and traveling constantly – Col. Kelly had a jam-packed life. Because of this, Shehan spent much of his time prepping for the event by researching Kelly’s life story.

After graduating from Bryan Station High School, Col. Kelly went to the University of Notre Dame for a Bachelor’s degree in English. Then, World War II broke out. Kelly left school to enlist in the United States Army Air Force and survived flying missions in the European tour. After World War II, he moved to Iowa to marry his late wife, Joanne, and start a family.

He moved around with Joanne and their children to different Air Force Bases across the United States. They eventually moved back to Indiana so Col. Kelly could finish his English degree at the University of Notre Dame. Right after, he joined the university’s English faculty.

“He had the status of a World War II veteran. When the guys came back and the women, they were all heroes. There were celebrations just everywhere. If you were a World War II Veteran, especially a pilot, you were a hero.” Shehan said.

Serving in the Air Force didn’t stop Col. Kelly’s love for education. Even while serving on American Air Force bases, he began working on his Master’s degree at the University of North Carolina.

In 1951, Col. Kelly was called to join the Osan Air Base to fly missions in the Korean War. After surviving this war, the Kelly family moved to Cranwell, United Kingdom, so that Col. Kelly could attend their Air Force Academy and continue teaching English. Soon, the family moved back to the U.S. to Denver, Colorado. Here, Col. Kelly started a doctorate program through the University of Denver.

Col. Kelly had a little more than two years with Joanne and their six children before serving in Vietnam, where he would never be seen by his loved ones or anyone else ever again.

“This isn’t the only M.I.A. family that I’ve dealt with. In Kentucky, I have either met or talked on the phone with all of the M.I.A. families from Vietnam.” Shehan said, “So I know the feeling. It’s the same with all of them. These families never have closure. There’s never the graves to go visit on Memorial Day because they just don’t know where that loved one is.”

A witness did give testimony that they saw Col. Cook’s plane crash.

According to PBS, it wasn’t until the 1990ss that the U.S. Defense P.O.W./M.I.A. Accounting Agency (DPAA) was able to conduct searches for Americans in Vietnam. A hostile diplomatic relationship prevented more searches from happening earlier.

But even today, the DPAA is still committed to searches for soldiers in Vietnam, Laos, and Cambodia.

“The Vietnamese government does work with our government now. We have teams. The DPAA.” Shehan said. “They’re a lot better about it now. The main holdback is funding. Every fiscal year they need to get enough funding to do all these things. It’s expensive, but it’s work that needs to be done. If the government can send your family member off to war, the least they can do is bring them back home.”