Fredrick owns up to performance, bounces back to lead Cats past S.C. State 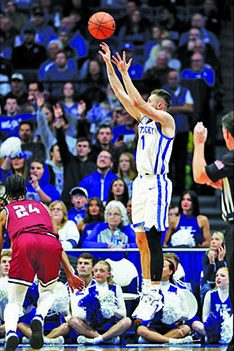 CJ Fredrick bounced back to lead the Cats to a huge win over visiting South Carolina State. (UK Athletics photo)

Instead of dwelling on the outing, Fredrick quickly forgot it and helped the No. 4 Wildcats (3-1) bounce back Thursday night, scoring 17 points in an overwhelming 106-63 win over South Carolina State.

“I have a short mind,” he said. “I flushed it because I knew we had a game in 48 hours. We just wanted to get back to the way that we play — run up and down and getting stops.”

Kentucky did that against the Bulldogs, and it was Fredrick who got things started. He scored the first six points, setting the tone for the hosts, who never trailed and remained undefeated at home.

“As a shooter, when you see the first one go, that’s always a good sign,” he said.

It was a stark difference from his showing against Michigan State when he struggled to make shots.

“It was definitely frustrating,” Fredrick said of Tuesday’s game. “We put ourselves in a position to win games, and we had some breakdowns. We went over some things in practice and did some things to get ready (for the next game).”

Fredrick also took a look in the mirror and then moved on from the first loss of the year.

“I like to think of myself as a good shooter,” he said. “My job is to make shots. I didn’t make shots Tuesday but as a shooter, you have to live with that. I owned my performance (and) I wish I could have made more shots, obviously. But you’ve got to deal with that and own your performance. You’re not going to make them all, but you’ve got to trust yourself, trust your teammates when you shoot.”

Fredrick and teammate Antonio Reeves each made three shots from long range, while Cason Wallace and Chris Livingston combined for three treys, providing more opportunities for their teammates.

“It changes everything to get a couple of threes down and (then) it opens up everything for our guards. If they’re driving and miss a layup, Oscar (Tshiebwe) and everyone else is there to clean it up. it really does open the floor and opens the game up a lot and puts pressure on the other teams and (forces the teams) to get stops, too.”

Chris Livingston scored 13 points, while Lance Ware and Cason Wallace had 12 points each. Antonio Reeves added 11 points for Kentucky, which got 51 points from its bench.

“I think it was very important (to get a win), just for the team’s morale. We needed to get back, especially after a disappointing loss like that. And we owed it to the fans also, so I think it was really good,” Livingston said.

Fredrick said it was “awesome” to see Kentucky coach John Calipari clear the bench, giving other players an opportunity to showcase their skills.

He also enjoyed playing alongside Tshiebwe, who made his second appearance of the season after sitting out the first two games while recovering from minor knee surgery. Tshiebwe played only 13 minutes had had six points and seven rebounds.

Calipari wanted Tshiebwe to get into a flow with his teammates.

“We weren’t going to play him today,” Calipari said. “The reason we played him — it’s a different game for the rest of our players when he’s in (the game). … I had him out there because we need to be a team and play together. What about that makes him unselfish? Stats. I left it up to him.”

Senior guard Sahvir Wheeler made his first start of the season for Kentucky and finished with six points and 10 assists. He missed the season opener because of a knee injury but has played in the past two games.

“We’re passing the ball to each other,” Calipari said. “It was a good win.”

“To play with different lineups and to play with Oscar, it was a lot of fun,” Fredrick said.

Fredrick hopes the fun continues when the Wildcats take on No. 2 Gonzaga Sunday in a showdown between top-five teams.

“I’ve never played there, but I’m sure it’s going to be a hostile environment, and as a competitor, that’s what you like. playing in those type of games. I’m really looking forward to it.”