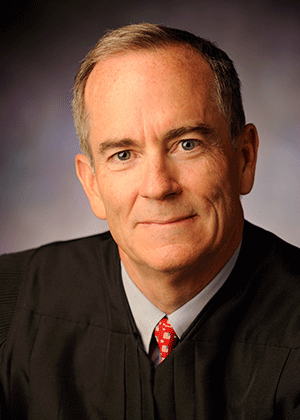 The justices of the Kentucky Supreme Court on Tuesday voted to elect Justice Laurance B. VanMeter as the next chief justice, replacing John D. Minton, Jr., who is retiring at the end of the year after 14 years as the administrative head of the judicial branch.

“We appreciate Justice VanMeter’s hard work, dedication and leadership as an experienced member of the judiciary and a valued member of the Supreme Court,” Minton said. “With this election, the justices have put their trust in Justice VanMeter to uphold the integrity of the court system and ensure the efficient administration of justice across the Commonwealth.”

VanMeter said he is honored to have the opportunity to serve Kentucky as the next chief justice.

“I am extremely humbled by the vote of confidence my colleagues have shown in me to be the next head of the Kentucky Court of Justice,” he said.  “Of course, we are saying goodbye to our long-serving chief justice, John D. Minton Jr., who leaves incredibly large shoes to fill.  I hope in some small way to live up to the standards he has set.  And I need to mention Deputy Chief Justice Lisabeth T. Hughes, who is also retiring.  Her wisdom and leadership has greatly contributed to the stability of our courts.”

Chief Justice-elect VanMeter was elected to the Supreme Court in November 2016 from the 5th Supreme Court District, which is composed of Bourbon, Clark, Fayette, Franklin, Jessamine, Madison, Scott and Woodford counties in central Kentucky.

Upon taking office Jan. 2, 2017, he became the third Supreme Court justice to have served as a judge at all four levels of the Kentucky unified court system: district court, circuit court, the court of appeals and supreme court.

VanMeter was born in 1958 in Lexington and was raised in Winchester. He received his undergraduate degree with a major in history in 1980 from Vanderbilt University and his juris doctor in 1983 from the University of Kentucky College of Law, where he was a member of the Order of the Coif and the Kentucky Law Journal. More recently, he earned a Master of Laws degree from Duke University School of Law in 2020 and, in July 2020, was elected to The American Law Institute.