Dores’ down Cats in Saturday shocker 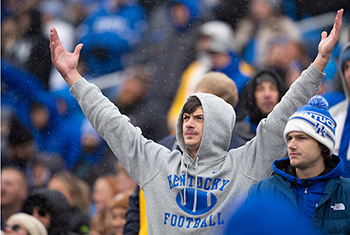 The Commodores ended a 26-game Southeastern Conference losing streak with a surprising 24-21 victory over the Wildcats at Kroger Field. Vanderbilt had not won a conference game since a 21-14 win over Missouri in 2019. Kentucky has lost four of its last six games after opening the season with four straight victories.

“Tough loss there,” Kentucky coach Mark Stoops said. “You know, bottom line is we didn’t do the things that we talked about all week. Really just the intensity that we played with a week ago (in win over Missouri), just thought it was average at best (Saturday).”

Kentucky (6-4, 3-4) had trouble scoring against the Commodores and failed to make crucial stops when it counted the most down the stretch. A costly hands-to-the-face penalty on a fourth-down play gave Vandy new life on its last series, and the Commodores capitalized with a 40-yard pass play on fourth down four plays later, followed by Mike Wright’s 8-yard scoring strike to Will Sheppard.

Wright, who began the season as a backup to injured starter AJ Swann, threw for 184 yards and a touchdown while rushing for 126 yards and a score, giving the Wildcats issues on defense.

The Vandy quarterback and running back Ray Davis combined for 255 yards and accounted for each of Vandy’s three touchdowns. Overall, the Commodores finished with 448 yards, compared to 322 for the Wildcats.

“Mike’s a resilient player, a resilient person,” Vanderbilt coach Clark Lea said. “You know, he’s had personal disappointment this season…There were some ups and downs in his performance, but he was ready when we needed him and made big plays when we needed him. The first run was a great tone-setter for us. Mike Wright is fun to coach. He’s fun to watch. I’m very happy for him.”

Kentucky running back Chris Rodriguez led the Wildcats with 162 yards rushing and two touchdowns, scoring both times when Kentucky was in desperation mode in the fourth quarter. A 72-yard touchdown by Rodriguez gave the Wildcats a 21-17 lead with 5:03 remaining.

The run by Rodriguez wasn’t enough.

“We had our opportunities,” Stoops said. “With Chris breaking off that run, if we get a stop, we have an opportunity to win the game. Had plenty of opportunities there. Couldn’t get it done.”

Will Levis, who threw for three touchdowns in a 21-17 win at Missouri last Saturday, threw for 109 yards and an interception. Levis was sacked four times, including twice on three plays in the first half.

Like Stoops, Levis said the Wildcats didn’t have enough “juice” or “hype” to overcome the Commodores.