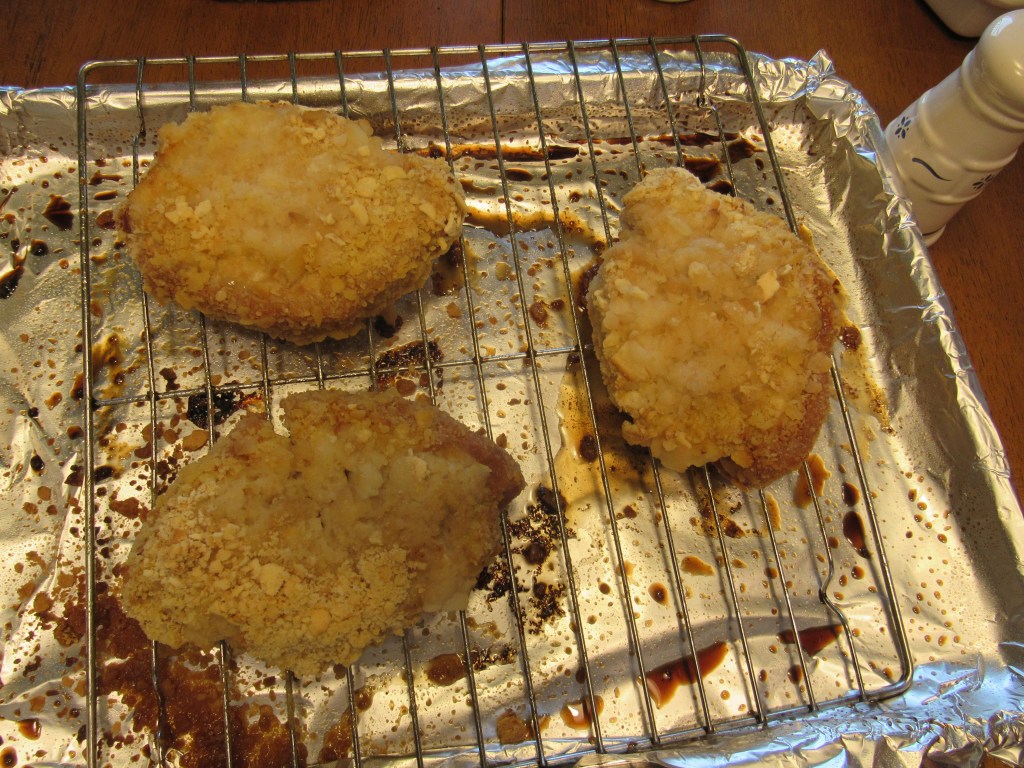 We’ve been eating a lot of chicken, and I was in the mood for something else and started looking through one of my recipe folders. I wanted something that was not too complicated and didn’t require ingredients I didn’t have on hand. The recipe I found for Oven-Fried Pork Chops fit the bill (I’d torn the recipe from an old issue of Southern Living magazine). I went to the freezer and took out a package containing three chops (that’s typically how many we eat at one meal, so that’s how I package them when I freeze them).

When it was time to start preparing supper, and the pork was thawed, I gathered the few ingredients I needed for this recipe and started.

I lined a small baking pan with foil (for easy cleanup), placed a cooking rack on top, and sprayed it with non-stick cooking spray.

Next, I emptied a sleeve of saltine crackers into a gallon zip-type bag, used a rolling pin to crush them to bits, and poured about half of them into a bowl. An egg went into another bowl, and I lightly beat it. After sprinkling both sides of each pork chop with salt, black pepper, and a tiny bit of red pepper. I dipped them into the egg and then into the cracker crumbs, pressing the crumbs to ensure they were sticking to the chops and placed the coated pork chops on the rack.

Now the recipe said to cook the pork chops in a 425-degree oven for just 8 to 10 minutes. I knew that that short cooking time meant the chops would come out at about a medium doneness. Brad and I do not like medium doneness on pork. We like it well done. So this is where I tweaked the recipe. I cooked the pork at 350 degrees for 30 minutes. When the timer sounded, I cut into one of the pork chops, which was still too pink for us. I turned the heat up to 375 and let the meat cook for 15 more minutes. At this time, I also loosely covered the meat with foil so it would not be over-brown.

When the timer sounded, the pork chops looked well done, but the cracker crumb crust looked a bit mushy. Covering them wasn’t the best idea since the steam must have undermined the crunchy oven friedness.

Nevertheless, Brad and I sat down to eat, and after a prayer, we started to eat. We both thought these pork chops had a delicious flavor and were pretty tender.

I nailed this recipe, and I’ll be preparing these oven-fried pork chops again despite the less than crunchy crust. Next time I’ll try baking them at a slightly higher temperature and watch them closely to ensure they are well done without over-browning.

• Dip chops in egg, and dredge in cracker crumbs. Place on a lightly greased rack on a baking sheet.