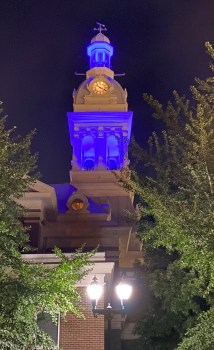 The courthouse will go blue in honor of Pulmonary Fibrosis Month. (Submitted photo) 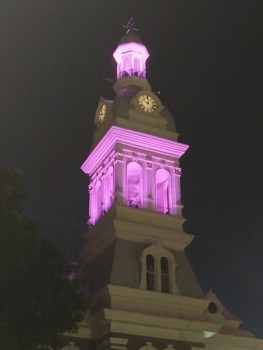 Over the next few weeks, the Jessamine County Courthouse bell tower will display lights of different colors, representing different occasions.

On Sept. 30, the last day of September, the courthouse will feature the color blue to support Pulmonary Fibrosis Month. The Pulmonary Fibrosis Foundation has an annual campaign, #BlueUp4PF, where they ask people to participate by “going blue” to spread awareness of the disease. Over 250,000 Americans struggle with Pulmonary Fibrosis, a condition with no known cure.

For the rest of the first two weeks of October, the Jessamine County Courthouse bell tower will be pink for Breast Cancer Awareness Month, an annual campaign to raise awareness about the impact of breast cancer. Breast cancer death rates declined by 40% from 1989 to 2016 among women, according to the American Cancer Society. The progress is attributed to improvements in early detection and awareness.

In the last two weeks of October, the courthouse will be decorated with Halloween decorations, including scarecrows and pumpkins, creepy crawlies, and the bell tower colored in purple, green, and orange. All residents and visitors of Jessamine County should drive through downtown this month to check out the courthouse to support the many honorable occasions and to see the Halloween fun.