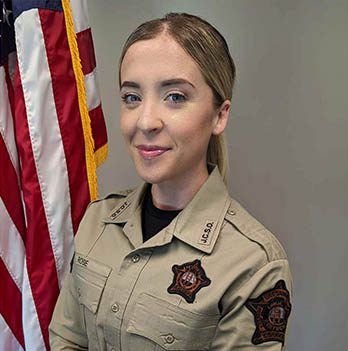 Jessamine County Judge-Executive David West swore in Rose on Wednesday, Sept. 14, as a deputy, which is the starting rank within the office. She will begin training at the Richmond Police Academy in January.

Her appointment bucks a trend nationwide. Though Rose is the not elected sheriff, there are few women who work in offices across the nation, and only 2% of America’s sheriffs are women.

Before applying to work in the sheriff’s office, Rose worked in custody at the Fayette County Detention Center in Lexington.

Having lived in Nicholasville her whole life, Rose has known for a while that she wanted to work in law enforcement- and it has been her goal to be the first woman to become a deputy in Jessamine County.

“I guess what inspired me growing up was my grandfather, who’s been the chief of police in Harrodsburg for many years. And then, you know, a couple of other family members that were in law enforcement that inspired my career growing up,” said Rose.

Although Rose enjoyed working in Fayette County and liked the people she worked with, the detention center wasn’t her end goal. She kept applying to agencies all over central Kentucky until she heard from Jessamine County through a referral by the Lexington Police Department.

Today, Rose is still learning the ins and outs of the sheriff’s office and has already spent a few days training on the shooting range, putting in the necessary work in order to be able to carry a weapon.

“I’m just extremely thankful that Jessamine County Sheriff’s Department has given me this opportunity, and I can’t wait to hopefully make a difference in Jessamine County,” Rose said.

First and foremost, Rose said, she is a mother. She has two children. A 7-year-old named Paisley and a 2-year-old named Tatum. This position was not only a goal for herself but also to set an example for Paisley.

“It’s incredible because not only have I reached my goal of getting in the department to be the first woman, I always want to set an example for my daughter and the fact that she can do whatever she wants and nothing can stop her. And I feel like being the first woman in Jessamine county as a deputy really showcases that. I’m just really happy to show her that she isn’t limited.” Rose said.

And hopefully, Rose will serve as a role model for all young women in Jessamine County interested in a career in law enforcement.

An earlier version of this story incorrectly stated that Rose was the county’s first female sheriff’s deputy and contained a typo that she is the elected sheriff. The Journal apologizes for these errors.