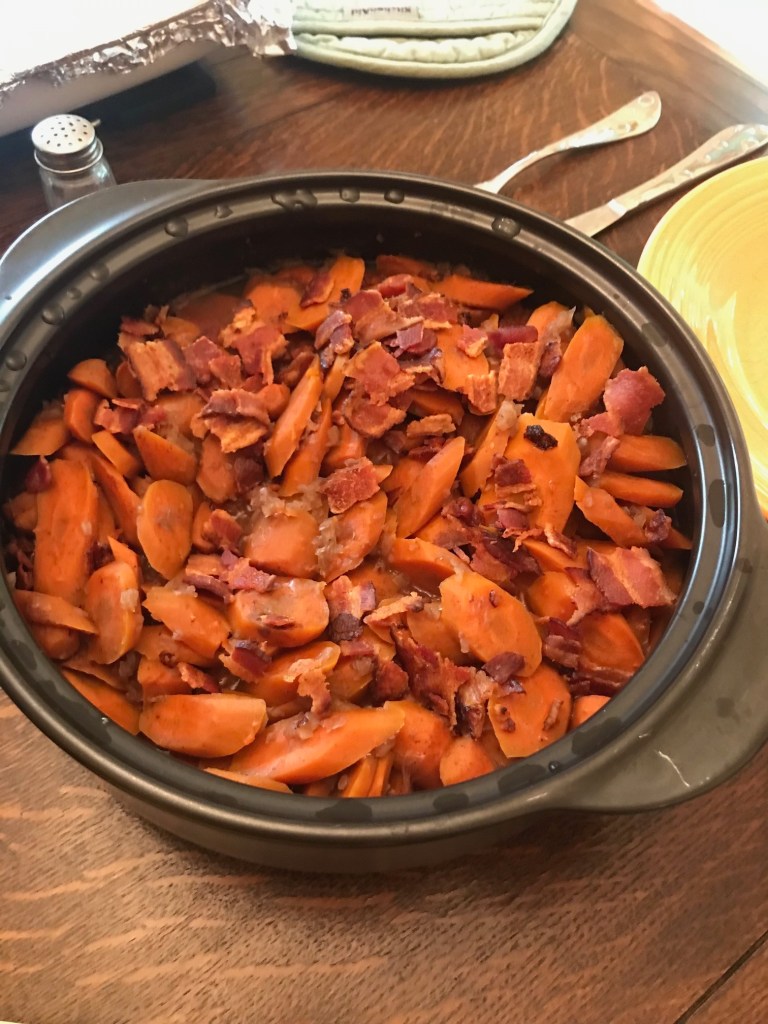 We were looking forward to a visit with our daughter, son-in-law, and grandson, Owen. We were going to take supper to them and I was trying to figure out what type of vegetables to take when I found this recipe for Apple-Infused Carrots with Bacon in my stash of recipes. I’d printed the recipe off the bbg.com (Better Homes and Gardens) website back in 2017.

I had everything I would need to prepare the dish except for shallots. Instead of making a trip to town to get that one minor item, I just used some red onion. Since shallots have a milder flavor, I just cut back a bit on the amount of onion I used.

After cutting up the carrots, two pounds of carrots is a lot to peel and slice. I poured them into my smallish slow cooker, which I’d sprayed with non-stick cooking spray. I added the minced onion, chicken broth, and salt. After stirring to coat the carrots, I put the lid on and let the carrots cook on low for 6 hours.

When the time was up, I turned the heat to high and stirred together the apple juice, cornstarch and cinnamon (I used 1/2 teaspoon cinnamon). I poured the liquid over the carrots, stirred the pot and put the lid back on for an additional 45 minutes.

Earlier in the day, I’d cooked some bacon in the oven until it was crisp. I crumbled the bacon and placed it in a bowl to take with us so we could sprinkle it on top of the carrots right before eating. I was afraid if I added the bacon before we left our house, it wouldn’t be crunchy when we were ready to eat.

We arrived at our daughter Sarah’s house and played with Owen while we waited for our son-in-law Michael to get off work. He arrived on the scene and we were ready to eat.

After Brad’s prayer for our meal, I sprinkled the bacon on top of the carrots and everyone filled their plates. Now you know how much we like bacon so I just knew these carrots would be great – they had to be right; everything is better with bacon.

I’m not sure if this should be called a “Nailed It” or “Failed It” recipe because the vote wasn’t unanimous. You may have to try this recipe for yourself and decide. Carrots with seasoning aren’t something Owen can have just yet, so maybe he would have sided with me if he’d been able to sample them.

Since there were so many carrots, two pounds of carrots is a lot, we took some home with us and they reheated just fine. After some thought, I’ve decided I won’t be adding this recipe to my self-made cookbook.

• If using low, turn to high.  In a small bowl stir together apple juice, cornstarch, and cinnamon; stir into carrots.  Cover and cook 45 minutes more or until thickened and bubbly.  Sprinkle with bacon before serving.