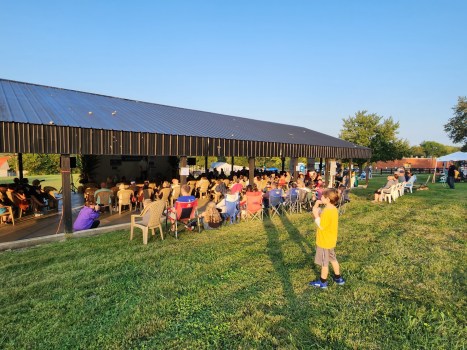 The festival is one of three of its kind left in Kentucky. The other two are in Bourbon and Rowan counties. (Photo by Anna Bryson) 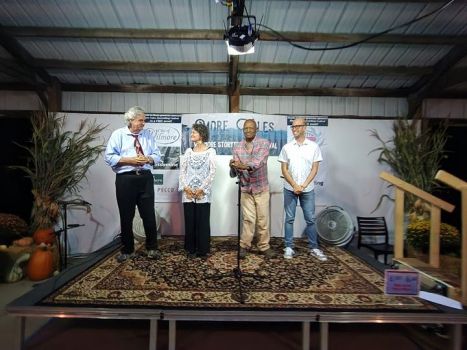 More Tales brought storytellers from all over the United States to Wilmore this past weekend. (Photo by Anna Bryson)

Long before cinema, television, the internet, and the quick postal service we know today, there was only one way that stories could travel- through word of mouth.

Today, people know these stories as folktales. People passed on real and imagined experiences through storytelling. That is how co-founder Anna Bryson explains the art of storytelling to kids.

“That’s how people told stories back then- because it was all they could do,” said Anna.

The seven people on the More Tales Storytelling Festival board have kept this collective human tradition alive since 2016.

Ed Bryson founded this annual festival with his daughter and lover of the art, Anna Bryson. He’s a professional storyteller and mountain man from North Carolina.

When the Bryson family moved to Wilmore, they thought they would bring a similar festival to the bluegrass. Anna and Ed wanted to see if they could pull it off. And they did. At their first festival in 2016, they had about 44 people. This year, they had around 1,000 visitors over the two-day festival, but the official numbers are not calculated yet. People traveled from Louisville, Shelbyville, Tennessee, and North Carolina.

There used to be quite a few storytelling festivals in Kentucky, but in the hard times of Covid, many of them were canceled for good.

“There are three left in the state. Cave Run is actually this coming weekend, and it’s probably the biggest one in the state, and then there’s one in Paris. They usually have it in May every year, and that’s it. There are a couple of big ones in Tennessee. But again, COVID has killed a lot of it. So, people will drive. They will drive very far to hear good storytellers. That’s why we were excited to get, of course, great storytellers.

The festival only had two returning tellers this year. One teller was Stephen Hollen. He’s been coming to the festival for three years and lives in Ohio. He was born in the mountains of Kentucky. He’s also a Mark Twain impersonator and did a sold-out dinner show on the Thursday before the festival.

“[Hollen] is good. He and his friends, they like to go to festivals and set up a tent that says ‘Free Advice from Old Coots.’ It might not be good advice, but it’s free. Because that’s the kind of person he is. He’s very engaging, funny, and has good stories to tell in conversations just to captivate you,” Anna Bryson said.

The other returning teller was Ed Bryson. He told one story during ghost tales.

“I try to get to tell him every year ‘cause he’s one of my favorite storytellers, but [laughs],” Anna Bryson said.

The other three storytellers had never performed at More Tales, but they are all nationally renowned and award-winning in their craft.

Anna Bryson noted all of the tellers were amazing this year.

Bobby Norfolk is an Emmy-winning teller from St. Louis.

Regi Carpenter is a TEDx featured teller from New York State. She often tells stories of her youth in New York and Maine. Adam Booth is from West Virginia and performs contemporary storytelling with a traditional Appalachian twist.

There were myriad vendors at the festival. Barbecue, drinks, crafts, and historical displays from the Jessamine County Historical Society were available throughout the day.

A local band, the Barely Shaken String Band, did two performances to entertain festival-goers outside of storytelling.

“They have a folky sound to them,” Anna Bryson said. “Their main singer has this thing called a cranky, and it’s awesome. He, like, cranks this box, and these pictures roll by as he sings this song. The pictures go along with the song. It’s a pretty rare thing that people can do in performing.”

This event is held every third weekend of September. Next year, it will take place from September 15 through September 16.

Because this event is free to the public, More Tales is sponsored by a few different entities. Sponsors include the city of Wilmore, Highbridge Spring Water, Visit Jessamine, DB General Contracting, Med Save Pharmacy, and PetCo. The board also applies for grants every year to pay for their storytellers.