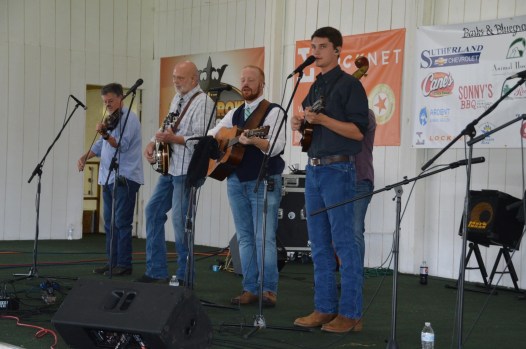 The Lonesome River Band was one of the featured acts at the festival. (Photo by Terry Vaught) 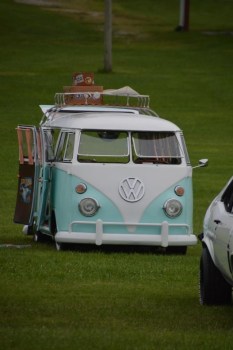 A vintage VW van was one of the highlights of the car show. (Photo by Terry Vaught)

Rainy forecasts worried the Efaw family before their 1st Annual Barks and Bluegrass Festival, but the event went on with attendance from car connoisseurs and bluegrass lovers.

Meagan Efaw, a lead organizer of the event, said that Saturday, September 10, was a blur.

“We actually had a very good turnout at the car show, considering there was kind of a potential for rain. They were a lot braver than I would have been. I was very pleased because I was with the forecast that we were not going to have cars. One person brought three [cars], and one brought two,” she said.

Out of the 23 entries, the winner of the car show was a 1968 Camaro. This win was not without competition- one entry was a pristine periwinkle Volkswagen bus.

A big ticket item in the auction was a quilt, signed by each band member performing at the event. Efaw said that nearly everyone was after it.

“The musicians were great. The music was just awesome. I mean, I have no complaints at all,” Efaw said.

According to the Jessamine County Animal Care & Control, two dogs also found a new home together.

Efaw is already planning next year’s event. The festival will be held on the same weekend- September 8, 2023.

“Everyone that came was like, ‘Please, do this again,’”  Efaw said. “We’re working on it right now to see what’s going to happen next year. There’s going to be some changes coming up to next year.”

Stay updated on the 1st Annual Barks & Bluegrass Facebook page. An announcement on next year’s event is coming soon, www.facebook.com/BarksandBluegrass.