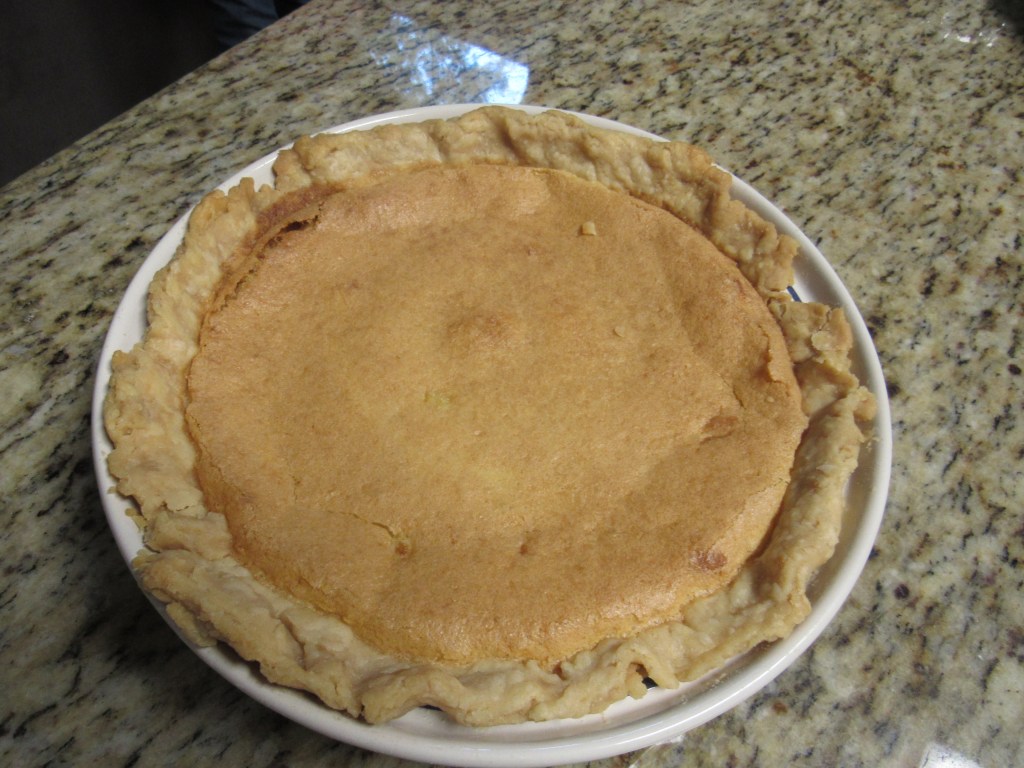 One of my favorite pies is chess pie, and I have one recipe that I typically bake, but anytime I spot a new chess pie recipe, I save it.

We had been invited to our friend’s, Stephanie and Barry, house for supper (their daughter Molly was in from Florida visiting), and I volunteered to bring dessert. I was thinking about what to make when I pulled this chess pie recipe from my stash; I’d torn it from an issue of Southern Living Favorites.

I make homemade pie crust, so I skipped the first set of instructions. Once the crust was in the pie plate, I lined it with non-stick foil and poured in some dried beans (to par bake the crust and to keep it from puffing up). After 5 minutes, I removed the foil and dried beans from the oven and let the crust continue baking for about 3 minutes. I took the crust out of the oven, and when it was completely cooled, I began making the pie filling.

I combined all of the filling ingredients except for the eggs, and once that mixture was thoroughly mixed, I added the eggs, one at a time.

The filling was together, and I poured it into the par baked shell and put it in the oven. I checked on the pie periodically to see if the edges of the crust were getting too brown, and since it wasn’t, I didn’t cover the pie with foil. The pie came out of the oven after about 50 minutes, and it sat on the counter to cool.

That evening after supper, we headed to Stephanie’s kitchen to help ourselves to dessert. Chess pie isn’t Brad’s favorite; chocolate chip is, so I’d made both. Everyone took a piece of each (except me because I don’t care for chocolate). Brad said he didn’t think the chess pie had a lot of flavor, but he’d just tasted the chocolate chip. Stephanie liked the pie, and Barry said it was “different” – he’d never had chess pie before. Molly agreed with her dad but said she thought it was good. I thought it was great. I liked the fact that this recipe had a thicker filling than my go-to chess pie.

Our evening came to an end, and we left a couple of pieces of pie with Stephanie and Barry and took the rest home. The next day I decided I’d take a piece to one of my biggest fans – Jo Gravett. I see

Jo at church almost every Sunday; she always has a smile on her face and always tells me how much she enjoys this column. When I arrived at her house, and she came to the door, she couldn’t believe I was sharing with her – and she, in turn shared some of the pie with her daughter, daughter-in-law, and son (who all live close by). Jo and I talked for several minutes, and then I headed on my way to run errands. The next day at church, Jo let me know the pie was wonderful and that everyone who got a taste loved it.

Since I love chess pie, and because Jo and family liked this chess pie; I’m going to say this recipe is a winner, and I “Nailed It.”

I plan on taking other creations to Jo, and next time I’ll take a bigger piece since she shares.

• Fit pie crust into a 9-inch pie plate according to package directions; fold edges under, and crimp.

• Bake at 425 degrees for 4 to 5 minutes. Remove weights and foil; bake 2 to 3 more minutes or until golden. Let cool completely.

• Stir together sugar and next 7 ingredients until blended. Add eggs, stirring well. Pour into pie crust

• Bake at 350 degrees for 50 to 55 minutes, shielding edges of pie with aluminum foil after 10 minutes to prevent excessive browning. Cool pie completely on a wire rack.

Living on Purpose: Birds of a feather flock together

Living on Purpose: The eagle who thought he was…