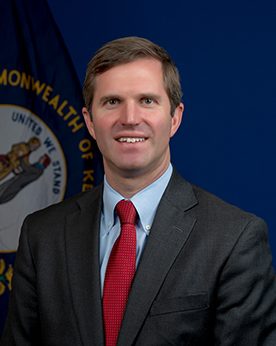 Gov. Andy Beshear ordered flags at all state buildings to be lowered to half-staff from July 5-7 in honor of three Floyd County peace officers who died after being shot in a standoff last Thursday.

Floyd County Sheriff’s Deputy and Martin City Fire Chief William Petry along with Prestonsburg Police Cpt. Ralh Frasure and Officer Jacob Chaffins were killed in the line of duty when they responded to reports of an active shooter in the small community of Allen. A K9 service dog and several deputies were injured during a standoff with 49-year-old Lance Storz, according to police officials.

Two of the deputies remain in the hospital in stable condition and one officer was treated and released. Additionally, one civilian was injured during the incident and is receiving medical care at a hospital, according to a news release from the Kentucky State Police, who are currently handling the active investigation.

Four deputies initially responded to the call and then called for backup when they were shot at. Police officials said Storz surrendered after negotiations that included his family members and that the situation began when the deputies attempted to serve a court-issued warrant Thursday evening related to a domestic violence situation.

The governor was quick to offer his condolences late last week.

“This is another hard day for Kentucky as we mourn the loss of three brave officers and a K-9 who gave their lives while protecting the people of Floyd County,” Beshear said in a news release. “Britainy and I ask the commonwealth to join us in praying for the family and loved ones of Captain Ralph Frasure, Deputy William Petry and Officer Jacob Chaffins. Let us stand together in honoring these heroes and their sacrifice, and pray for a full recovery for those injured. “

Funeral services for Petry were held on Tuesday. Services for Frasure and Chaffins will be later this week.