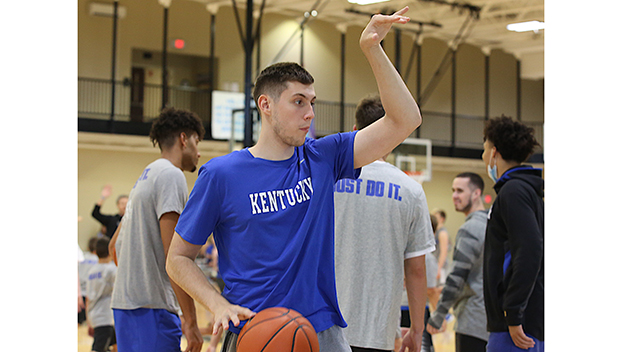 The Kentucky guard is ready to make a contribution after enduing a roller coaster ride last season. The former Covington Catholic High School standout overcame a foot injury but a hamstring injury he suffered prior to the season-opener against Duke sidelined Fredrick for the season.

It was an injury that required surgery and Fredrick had a difficult time coping with the circumstances.

“When I had my second surgery, there were just so many people saying ‘I feel bad for you’ and I had about a whole day where I just cried with my family,” he said. “I didn’t understand why these things happened to me.”

Looking back on the experience, Fredrick has since forged forward said his “body feels really good.”

“This is probably the most athletic and most quick I’ve ever been,” Fredrick said. “It allowed me to focus on myself and my body and it gave me time to heal my body. It’s given me time.”

Fredrick is cleared by medical staff to return to the court, but is slowly making a comeback and plans to participate in the Bahamas Tour in August.

“I’m super excited,” Fredrick said. “For me, that could be my first game back. It’s a goal for me just because it gives me an opportunity to go out there and mess up and it doesn’t count. If I don’t play well or I mess up, that’s what I need. But it’s a great opportunity for us to bond.”

Since he was in eighth-grade, Fredrick has been considered a sharpshooter and is one of the top shooters on the team. During his sophomore season at Iowa two years ago, he shot 47 percent from long range and averaged 7.5 points per game.

“That’s something that I think is definitely going to stay with me,” he said. “I can really shoot the ball but I like to be able to do other things.”

He also is a consistent defender.

“I don’t know why people think I’m a bad defender,” Fredrick said. “In high school and in college, I’ve been one of the better defenders on my teams. I take a lot of pride in it.”

Although he’s yet to play a game at Kentucky, he will be counted on to provide leadership for the Wildcats next season.

“This is my second year at Kentucky. I feel like I’m a veteran here,” Fredrick said. “I know (John Calipari), I know the plays. Obviously, I didn’t want to get hurt, but it’s almost been like a blessing for me. Just being able to learn about the game, learn what Cal likes. It’s been a good six, seven months.”