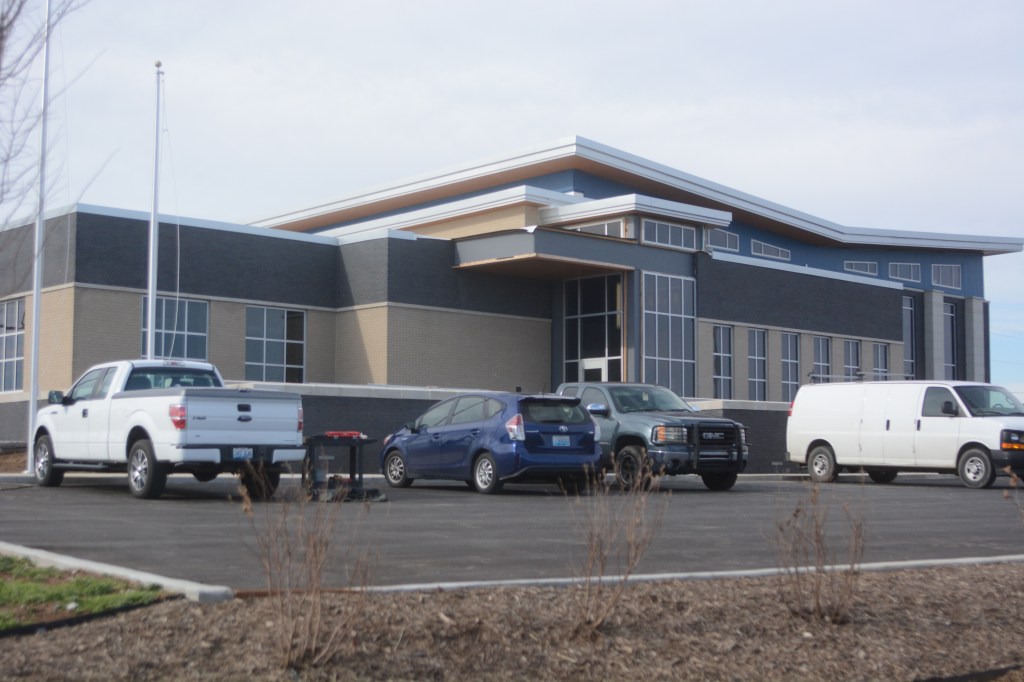 In recent weeks, construction workers have been putting the finishing touches on Nicholasville's new police department, which is scheduled for completion in March. (File photo/Jessamine Journal)

Nicholasville Police Department is expected to move into its new facility any day now, according to Doug Blackford, director of general government.

“We’re getting close to a final walkthrough — final punch list as we call it — the last week of February,” he said. “If everything goes well. We hope to start moving in by the second week of March.”

In August, Police Chief Todd Justice told a Jessamine Chamber of Commerce luncheon crowd that the building’s tentative completion date was Nov. 1, 2021. Construction delays due to the lack of materials pushed that date to the end of February, Blackford said in a recent interview.

Located at 717 N. Main St., the new police station will be about 25,000 square feet. It was designed by architectural firm Brandstetter Carroll.

The current police station, which is shared with the fire department, was built in 1983.

“The reality is that (the new facility) is long overdue,” Blackford said. “In the existing building, they’ve been in tight quarters for a long time. This new facility basically brings us up to date with an operating space that can handle our department.”

According to previous reports, the station will have two floors — a main floor and a basement below. The main floor will be where the public will interact with officers the most, housing the lobby. This floor will also be home to a conference room with capacity of approximately 100 people. City commission meetings will take place in this room going forward once the move in is complete.

The basement floor will include an evidence room, a fitness room, a break room and a storm shelter. Both floors will be utilized for police office space, Blackford said.

There will also be a dedicated training space for officers, which is something new for the department.

“We always have to ask and borrow places for training,” Nicholasville Police Chief Todd Justic said. “It will be nice to have our own.”

Parking for the department’s equipment will be behind the station, while the public will use the front parking lot.

The estimated cost for the project is about $7.5 million. Despite the material delays, which caused a few work order changes, the project costs remain on target, Blackford said.

“We’re going to get the punch list completed. Once we know everything is good, we’ll schedule a grand opening for the public,” Blackford said. “We’re excited to get into (the building). It’s been a long time coming. Nicholasville is excited to have a new facility for its police to operate out of.”

News contributor Nicole Bowman-Layton wrote this for the Jessamine Journal.