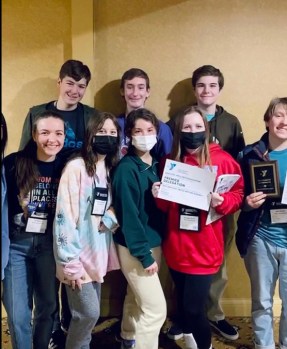 “As for what the students learned on this trip, I think they gathered a lot of world knowledge, communication skills, and networking,” said adviser Tommy Grant. “At these conferences, the students have to prepare a bill or resolution that requires a lot of forethought and research, especially when representing a country that is not their own in a mock legislative setting. The kids develop public speaking skills, debate skills, but also critical and analytical skills that they demonstrate when having to speak for or against bills, or defending their own against naysayers in debates.”

Students also assume roles of lobbyist or ambassador, and they learn to politic (like the real world) to gain support from other delegations or countries when going through the sessions, Thornton said.

“It is extremely entertaining, but also gratifying to see these kids from all over the state come and engage with such enthusiasm,” he said.

John Wood and Jake Baler won outstanding speaker. The duo, along with Elijah Stephens and Palmer Schmidt were on the resolution team that debated and had their mock resolution passed (by one vote!) representing the country of Haiti. The resolution was aimed at using UN peacekeepers to train Haitian police in tactics to stop human trafficking.

Kudos to the Colts!