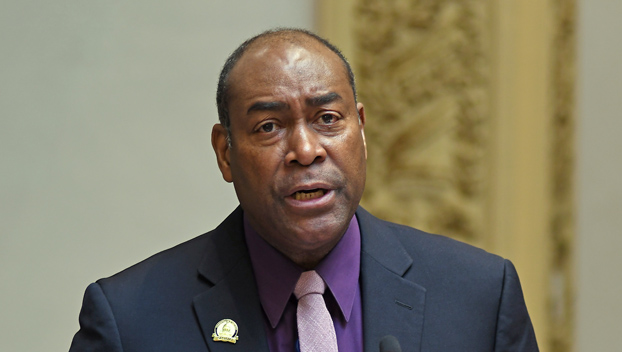 Senator Donald Douglas, M.D. (R-Nicholasville) represents the 22nd District, which includes Garrard, Jessamine, Mercer, and Washington Counties and part of Fayette County. Senator Douglas serves as a member of the Senate Standing Committees on Appropriations and Revenue; Banking and Insurance; and Licensing and Occupations. He is also a member of the Capital Projects and Bond Oversight Committee.

As time springs forward, so too has the 2022 biennial state budget as various state budget bills (executive, legislative and judicial) crossed significant milestones in week 10.

The state Senate officially placed its fingerprint onto the most significant budget related bill, the executive branch’s two year budget, which is House Bill 1. HB 1 alone allocates $26.3 billion of your taxpayer dollars and the Senate’s priorities reflected in the Senate Committee Substitute 1 (SCS 1) to HB 1.

The two chambers will enter into budget negotiations in a conference committee, likely to take place as soon as next week. Both chambers select members to begin budget negotiations on their differences so the final product can be agreed upon. SCS 1 to HB 1 reflects the Senate Majority’s keen understanding that each penny entrusted to Frankfort was from an investment of time and energy of every single Kentucky taxpayer.

High points of the Senate budget include:
Pay increases for state employees
• A $4,500 raise in the budget’s first year for state employees, which is the equivalent of a 10 percent raise for employees in positions making $45,000. The state is finding many positions harder to fill and retain with no cost of living increases over the many years. The second year will also include a similar raise amount, but will be contingent on a Personnel Cabinet study that emphasizes employment environment, merit, locality and positional impacts.

• Those considerations will also be applied in raises for Kentucky State Police. Each trooper will receive a minimum $15,000 pay increase.

• Social workers will receive a $4,800 increase in the first year and then a 10 percent increase in the second year. These raises are on top of the 10 percent raise they received effective December 16, 2021 by the governor’s executive order. An important component of this Senate budget, and a reflection of the workload social workers carry, is to provide an alternate work program for those who have worked at least four years with the state. This will provide an alternate work opportunity that will help address employee burnout, heavy caseload and the emotional drain on the profession.

• Leaves a conservative $1.3 billion remaining after the biennium, providing the state fiscal flexibility

• The Senate budget accomplishes all this while including the chamber’s tax refund plan for working Kentuckians, $500 for single filers and $1,000 for households

Education investments
• Increases per pupil funding to $4,100 in Year one (up from $4,000) and up to $4,200 in Year two and provides funding for school construction and maintenance. Previously allocated federal dollars became ineligible for school infrastructure funding following Biden administration policy change after Kentucky had already allocated those funds last year.

• Increases inmate per diem state reimbursement to county jails by $4, lowering the burden on local jails that are housing state inmates.

I will keep you updated as budget negotiations yield something more concrete. Please know Senate District 22 remains my priority as we work to maximize the tax dollars you have entrusted to your Senators.

Aside from these significant budget efforts, election integrity was also a big part of week 10 legislative efforts.

Senate Bill 216 builds on election integrity efforts implemented in SB 4 of the 2020 legislative session and the bipartisan election reform SB 574 in 2021. SB 216 expands the Attorney General office’s independent inquiry of potential election irregularities to include no fewer than 12 random Kentucky counties. It implements measures to prevent voter fraud by removing credit or debit cards as a viable form of voter identification and prohibits a voting system from being connected to any network, including the internet, or with any external device.

Additionally, it requires all voting machines to use paper ballots by January 1, 2024, and returns the Kentucky Secretary of State as chair of the State Board of Elections. After trust was breached, the previous Secretary of State was rightly removed as chair of the board.
Senate Bill 125 seeks to further improve Kentucky’s animal abuse rating, which has been poor for a number of years now but has been improved by measures to increase penalties against animal abuse.

SB 125 requires any law enforcement agency seizing a domestic animal whose owner violates animal cruelty law to notify the owner about the animal’s location within 24 hours and that they may be financially responsible for the animal’s care. If the owner does not contact the agency in 10 days, the animal may be deemed abandoned and moved to a safe place. The seizing agency may petition a court to require the owner to pay for all reasonable costs related to its seizure and care. The bill also prohibits the euthanization of a seized domestic animal, except for humane reasons, as determined by a veterinarian.

Senate Bill 205 is Kentucky’s response to major banks and investment firms that are denying lending to and investments in fossil fuel companies that promote “green” investments and political agendas. The coal industry has been a vital part of Kentucky’s economy for over 100 years and has provided affordable energy and good jobs for countless citizens of our Commonwealth.

This concerted effort to financially starve out the fossil fuel industry is contributing significantly to high fuel and energy costs, resulting in extreme financial hardship on hard-working Kentuckians. SB 205 makes it clear that Kentucky stands with our fossil fuel companies and the Kentuckians who work every day to produce the resources that power our nation.

The bill requires the Kentucky State Treasurer to maintain a list of financial companies that are boycotting the fossil fuel industry and share that list with government agencies in Kentucky that make substantial financial investments, such as state pension funds.

I am thankful for the privilege of representing Fayette, Garrard, Jessamine, Mercer, and Washington Counties in the Kentucky Senate. I welcome your comments on issues of importance to you. You can call me toll-free at 800-372-7181 or email me at Donald.Douglas@lrc.ky.gov.

Senator Donald Douglas, M.D. (R-Nicholasville) represents the 22nd District, which includes Garrard, Jessamine, and Fayette Counties and part of Fayette County. Senator Douglas serves as a member of the Senate Standing Committees on Appropriations and Revenue; Banking and Insurance; and Licensing, Occupations, and Administrative Regulations.