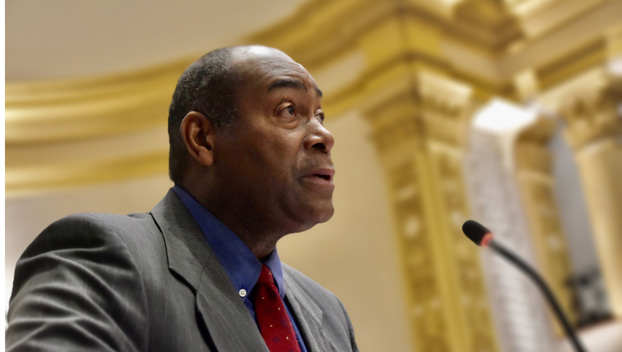 Senator Donald Douglas, M.D. (R-Nicholasville) represents the 22nd District, which includes Garrard and Jessamine counties and a southwestern portion of Fayette County. Sen. Douglas serves as a member of the Senate Standing Committees on Appropriations and Revenue; Banking and Insurance; and Licensing, Occupations, and Administrative Regulations.

Two-thirds of the 2022 legislative session is behind us upon crossing the 40-day mark of the 60-day session. What arguably has been a marathon up to this point will become a sprint as budget negotiations draw near. As your state Senator for the 22nd District, my first term has been a unique and fulfilling learning experience. I am grateful to you for the opportunity to serve the communities we love so dearly.

First, I want to share with you that I attended the Rally for Life in the Capitol Rotunda on Tuesday, March 1 where I was honored to speak among an incredible crowd of pro-life advocates.

The rotunda echoed with the support of House Bill 91, which if enacted, would place a constitutional amendment on your election ballot this November for you decide if our state constitution should be amended to affirmatively state that in Kentucky, there is no right to an abortion.

The amendment would be a preemptive measure ahead of potential rulings weakening Roe v. Wade. I hope to see House Bill 91 reach the Senate chamber where I will fully support its final passage.

Two days after the Rally for Life on Thursday, March 3, Kentucky received another pro-life win in the Supreme Court of the United States. In an 8-1 ruling, the court affirmed Kentucky’s Attorney General can defend pro-life legislation. The Kentucky General Assembly has passed numerous bills since a new majority was secured in 2016.

Among them have been bills to ban live dismemberment abortions, which is the bill Attorney General Daniel Cameron was seeking to defend, and now will, before the nation’s highest court. I applaud the Attorney General’s office for the stellar work on this front and I pray for continued rulings that will result in further protections for the most innocent.

As we wrap up week nine, much is happening in the world. Despite the issues we must address domestically, and here in the commonwealth, we cannot help but get caught up in challenges we face nationally and even abroad. Rightfully so. The conflict between Ukraine and Russia is the latest topic filling airwaves and tugging at the heartstrings of freedom-loving people worldwide.

Bipartisan Senate Resolution 153 was adopted in week nine and spoke to the importance of freedom and standing in unity with the Ukrainian people.

The Commonwealth of Kentucky supports Ukrainian sovereignty and their right to self-determination, as we have a shared love of freedom and self-governance. America is the shining city on a hill, and as proud Americans, we wish for nothing more than for the same independence and love for liberty we share at home to be spread across the globe.

Since declaring independence from Russia in 1918 and being freed from the grip of the communist Soviet Union in 1991, Ukraine has developed a rich culture, language, and history, unique to itself. After the fall of the Berlin Wall, Christianity was introduced to the nation and allowed to flourish. Senator Robby Mills shared a touching story on the Senate floor about his travels to Ukraine during that time.

Like Kentucky, Ukraine is geographically blessed and is rich with natural resources, which are the primary drivers of its economy. These national treasures are to be enjoyed by the Ukrainian people, not seized by an authoritarian Russia and used to expand its wealth and power.

As a local way Kentuckians can stand against Russia and support Ukrainian sovereignty, our robust spirits industry can cease selling and purchasing Russian vodka and other goods. This is an excellent opportunity to shop locally and benefit Kentucky and United States-produced liquor products.

With Ukraine being the largest Eastern European country, its independence is in our country’s best national security interest, especially as communist Russia and China strive to become a global hegemony.

We must stand for the values our republic best exemplifies and alongside the people of Ukraine against an aggressive, unpredictable and dictatorial Russia. The balance between human prosperity and freedom and human suffering and subjugation is constantly shifting. Despite fears and anxieties of foreign unrest, Americans must continue to defend the principles that best enable us to live out the rights we are each endowed with.

I detailed Senate Bill 194 in last week’s legislative update. It cleared the Senate in week nine unanimously. The bill would provide each working Kentucky taxpayer a refund of up to $500 for individuals $1,000 for households.

Senate Bill 160 benefits Kentucky’s spirits industry following a bizarre change in interpretation of law by the Kentucky Alcoholic Beverage Control (ABC) Board. It allows a distiller to conduct private selection events and sell private selection packages at retail so long as it sells the packages through a wholesaler and licensed retailer.

The bill will also allow distillers to sell private selection packages selected by the distillery’s own representatives directly from the premises to visitors. Before the ABC’s change in statutory interpretation, distilleries were already doing these things.

The bill includes an emergency clause to reassure Kentucky distillers of their operations as soon as possible. That means the law would go into effect immediately upon filing with the Secretary of State’s Office.

Senate Bill 158 was a simple reorganization measure that establishes the Office of Fleet Management in the Finance and Administration Cabinet.

House Bills 4, 6, 144 made passage in the Senate too. Those bills could reach the Governor’s desk for his consideration to be signed into law or allowed to become law without his signature or vetoed. If vetoed, I trust the legislature will soundly override the veto just as we did in the past. House

Bill 6 was the House Bill similar to my efforts with Senate Joint Resolution 99 regarding motor vehicle taxes.

The legislature has made it abundantly clear that we stand with Kentucky taxpayers this session. That same message will be conveyed in upcoming announcements on state budget developments. I’ve been fortunate to participate in diligent review of the Governor’s and House’s budget proposals and am a voice in the discussions of what the Senate hopes to see in the biennial budget. I’ll expand on that in the next legislative update.

Senate District 22 is first in my mind as I participate. Stay tuned during week 10 of session by watching live legislative coverage at ket.org/legislature.

The Senate Appropriations and Revenue Committee, which I am a member, met on Wednesday, March 9, at 9 a.m. You can find archived footage at ket.org/legislature/archives.

It is an honor to serve you. Please reach out to my office with any questions or concerns at Donald.Douglas@lrc.ky.gov. You can also share your opinions on legislation by calling the Legislative Message Line at -800-372-7181.

Senator Donald Douglas, M.D. (R-Nicholasville) represents the 22nd District, which includes Garrard and Jessamine counties and a southwestern portion of Fayette County. Sen. Douglas serves as a member of the Senate Standing Committees on Appropriations and Revenue; Banking and Insurance; and Licensing, Occupations, and Administrative Regulations.