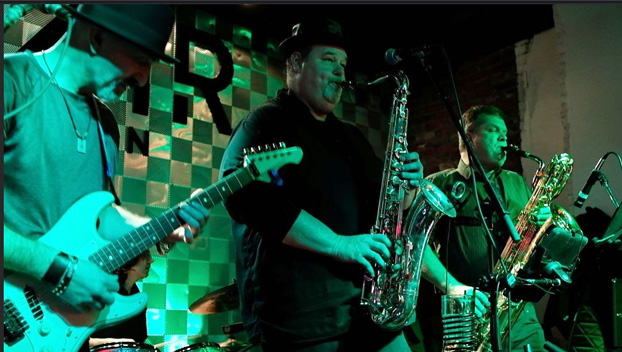 Matthew Polashek of Nicholasville was awarded the Brass/Wind Player of the Year recently at the Lexington Music Awards. Polashek along with musician Dane Sadler, formed Bigg Sugg and the Jazz Funkers about a year ago. The band received Jazz/Latin/Big Band/World Artist of the Year. The band was also nominated for an Appalachian Arts and Entertainment Award. (Submitted photo)

A musician with links to Jessamine County was recently honored at the Lexington Music Awards.

Matthew Polashek, 47, of Nicholasville, was awarded the brass/wind player of the year. He, along with musician Dane Sadler, formed Bigg Sugg and the Jazz Funkers about a year ago. The band received Jazz/Latin/Big Band/World Artist of the Year. The band was also nominated for an Appalachian Arts and Entertainment Award.

Polashek grew up in Wauzeka, Wisconsin, a small town that had a population of 728 in 2010, according to the United States Census.

“There were 28 people in my high school class,” he said. “I knew at a young age I wanted to make playing the saxophone my life, but there were little opportunities for performing. My parents were very supportive and got me lessons at a college in Iowa at Luther College and bought me a professional saxophone that I still play today.”

Polashek says he has a passion for connecting with people through music.

“I feel like the best musicians are people that have something to get out,” he said. “I have had a lot of things in my life that I need to get out and music is my catharsis.”

Miles Davis, a trumpeter, bandleader and composer, is the person from which Polashek says he draws his greatest inspiration.

“He changed the music world many times and set John Coltrane off on his path of visional creation,” Polashek said.

After going to college in Green Bay and working professionally as an audio engineer and performer for a while, Polashek moved to New York City in 2002 to pursue his dream of playing.

“I worked as a textbook editor, while I pursued my master’s in teaching, in the Bronx. I started working as a high school music teacher in Brooklyn and worked at playing,” he said. “I played quite a few NYC venues including Birdland, Lincoln Center and The Bowery Ballroom. I also got a gig playing the gospel brunch show at Sylvia’s in Harlem every Sunday. While I was teaching I earned an MFA (terminal degree like a doctorate) from a college in Vermont.”

In 2013, Polashek’s life took a tragic turn when he was injured in a car wreck coming back from a sound job on the end of Long Island. Polashek’s then wife was killed in the accident, leaving behind Polashek and their 3-month-old son.

“It left me with permanent nerve damage in my foot and a lot of pain from my injuries,” he says of the wreck.

From the Big Apple to the Bluegrass state

In 2015 after marrying his current wife, Charity, the couple decided to move into his mother’s house in Nicholasville. The couple has three children.

“My brother (Timothy Polashek) teaches at (Transylvania University) and my mother had moved to town,” Polashek says. “I was having a hard time getting around NYC with my recovery, and the school I was working for had cut its music program, so we opted for Kentucky.”
The siblings have had many successful ventures working on jazz-electronic music and have performed all over the United States and in South Korea, Polashek says.

He says moving to Kentucky from the Big Apple has been an improvement.

“The schools in NYC are a terrible mess. Everything is dirty and crime-ridden and expensive. It is mind-boggling,” he says. “Living in Kentucky has been a massive upgrade!”

He did have to teach his wife how to drive a car and they miss some of the perks of living in a big city — 24/7 bodegas and $5 pizza slices.

“With our kids and our lifestyle, this is a win!” Poleshak says. “We paid less for our four-bedroom house than we did for our three-bedroom apartment in NYC. We are extremely happy with the education our children are getting in Jessamine County and I can’t imagine doing anything different.”

Getting into the music scene

After moving to Kentucky, Poleshek says he started looking for work right away.

“Initially I started playing saxophone with a band called Funkabilly that was headed up by Sadler,” he says. “The drummer and singer was Billy Ray Barker, who was John Michael Montgomery’s drummer for a while.”

When Polashek saw a newspaper article about Manchester Music Hall opening, he applied for a sound engineer job and worked his way up to production manager.

“This kept me from playing the Funkabilly shows, and although it was great to be working, I missed playing,” he said. “I was still collaborating with my brother and my live event production company, Angry Baby Productions, was growing, which was nice for the money. But I missed playing jazz-funk, which feels like home to me.”

“I tried to pivot my company into streaming and video production and have had some success doing that, but I reached an epiphany, as many people have, that I wanted to focus on pursuing my passion,” Polashek said.

Polashek reunited with Sadler, who had a residency gig at Creaux, which spawned their group, Bigg Sugg and the Jazz Funkers.

“We’ve been working on it for about a year,” Polashek says. “… I was fairly concerned about finding people to play with in Kentucky but after moving here I have found the scene to be very fruitful!”