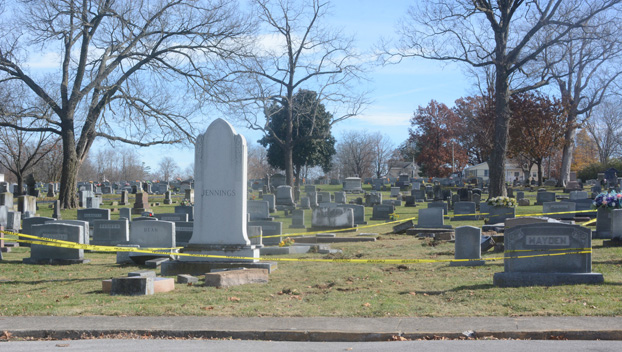 Photo taken shortly after the incident. Nicholasville City Commission learned that repairs to Maple Grove Cemetery could cost around $200,000 during its meeting Monday at commission chambers. Doug Blackford, director of General Government for Nicholasville, said the cost of restoration is still being determined. “I don’t know the top total, but it’s going to be closer to $200,000 than $150,000,” he said. (Jessamine Journal file photo)

Nicholasville City Commission learned that repairs to Maple Grove Cemetery could cost around $200,000 during its meeting Monday at commission chambers.

Late November, around two-dozen headstones were damaged after being plowed into by an alleged drunk driver. Police arrived at the scene to reportedly find a truck amidst the rubble with a man identified as Thomas Garner inside.

During the commission meeting, Doug Blackford, director of General Government for Nicholasville, said work crews cleaned up the debris left by the incident. He said the cost of restoration is still being determined.

The city is storing the damaged stones until they can be replaced. Blackford noted that the city has been able to contact about 80 percent of the families who have relatives buried in the damaged area.

Nicholasville officials are currently working with a monument company to put together a restoration plan. Some of the stones are so old that they are having a hard time finding an exact replacement, Blackford said.

“Damage was done to a lot of older stones,” he said. “A lot of the materials don’t exist anymore except if we get something from China. … Our commitment is to repair it as close to what it was as possible.”

Due to material shortages, most monument companies are three to four months behind on their orders, Blackford said.

“We are going to put it out to bid,” he said. “We are concerned that we may not have a lot of interest. Some of the monument companies have already told us no because they’re behind on serving their regular customers.”

Nicholasville wants the families involved in the restoration process so they can be satisfied with the product, Blackford said. Contact information will be posted on the city’s social media account for families impacted by the incident.

Blackford says Maple Grove’s restoration is expected to conclude by next year.

In other matters, Commission approved the first reading of amendments to the zoning and subdivision ordinances. Both changes are mostly definition updates.

In the zoning ordinance update, the city proposes changing the required regulation for multi-family parking for 2 ¼ parking spaces per unit.

The proposal also changes fencing requirements for front side yards, which may include houses on corner lots. The proposed change will allow for half the front side yard to be fenced without requiring a variance. Otherwise, the property owner can’t go any further than the front of the house with a 6-foot fence.

Proposed subdivision regulation updates are also mostly definition changes. It also calls for 5-feet wide sidewalks in new subdivisions and has specifications on how to taper from a wide to narrow sidewalk.

In other matters, members of the Nicholasville police and fire departments were recognized for their help with tornado relief.

Also in regards to the fire department, Commission approved allowing the mayor or his liaison to sign documents to accept grants from the Kentucky Fire Commission. One for over $2,000 will go toward the purchase of eight new fire helmets. The other grant will aid in the purchase of a thermal imager.

The thermal imager grant will help offset the cost of equipping the new ladder truck.

“We have to purchase it,” said Fire Chief Craig Cox of the thermal imager. “Once we purchase it, we have to send copies of the invoice and check to get reimbursed by the fire commission.”

During the meeting, Healy thanked the commission for the opportunity.

“I have lived here for 15 years,” she said. “I am a big believer of what we have to offer and am looking forward to working with all the county entities and helping them grow.”