Kentucky shows its might down stretch in win over Gamecocks 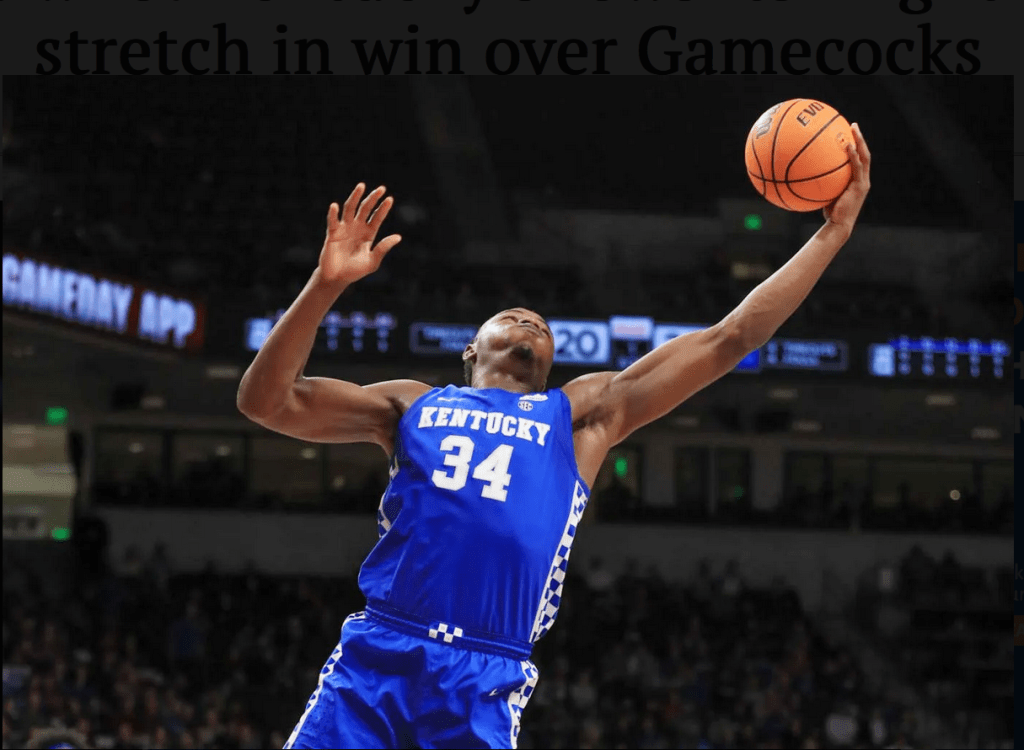 Kentucky is feeling comfortable away from home.

The fifth-ranked Wildcats (20-4, 9-2) notched their fifth consecutive victory, including back-to-back road wins with an 86-76 victory at South Carolina Tuesday night.

Coupled with top-ranked Auburn’s 80-76 setback at Arkansas Tuesday night, Kentucky moved within one game of the Tigers in the Southeastern Conference standings. The Wildcats have won five of their past six road games.

“It was a great game for us,” Kentucky coach John Calipari said. “You want to be playing all kinds of different ways (this time of year). You want overtime games, you want games like this, where it goes 43-43, so you can find out who’s who and they can find out who’s who. … these kids responded. I’ve got a really smart team.”

South Carolina, which never led, tied the score at 43 midway through the second half, That’s when the Wildcats regained control and created a degree of separation between the two conference foes. Kentucky stretched the margin back to double digits down the stretch.

“I’m just glad we’re done playing them,” Calipari said. “They’re going to win games, like I said about Vanderbilt. You look at these teams and they’re ready to play us. These dudes, they’re playing Kentucky. They get after it.”

Kentucky National Player of the Year candidate Oscar Tshiebwe played just 11 minutes in the first half and scored just six points and had just two rebounds. Tshiebwe flipped the switch in the second half and continued his impressive total of double-double performances. Tshiebwe finished with 18 points and grabbed 14 rebounds to collect his 18th double-double of the season.

Tshiebwe said the Gamecocks couldn’t keep pace with the Wildcats in the second half, which resulted in his turnaround performance.

It was Tshiebwe who led the way, but he was followed by five more Wildcats in double figures. Keion Brooks added 15 points and just missed a double-double with nine rebounds, followed by TyTy Washington with 14 points, Kellan Grady with 12, and Jacob Toppin and Davion Mintz added 10 points apiece off the bench.

Brooks said the balanced attack “just shows how good we are as a team and how individual players can get to different spots” with “guys who are a threat from deep, a threat around the rim with the lob with dunks and get to the rim with a mid-range (shot).

“When you have players who can score at all three levels, it’s really hard (for the other team) to lock in and take one thing away,” he said.

Toppin scored six straight points during a crucial stretch late in the first half but didn’t return after going down with an apparent ankle injury. Calipari didn’t provide an immediate update on Toppin following the contest, but Brooks said “he’ll be fine” after visiting with his teammate in the locker room.

“It’s going to take some time (for him) to get well and that’s what he needs,” Brooks said.

Sahvir Wheeler had just four points, but dished out 11 of his team’s 25 assists.

“He impacts the game,” Calipari said. “The good news is, if he’s struggling and he needs to come out, we’re fine. How many point guards impact the game like he does? Not many, not many in this country.”