Last parcel in Brannon Crossing to be developed; Plans include 16,000-square-foot strip center 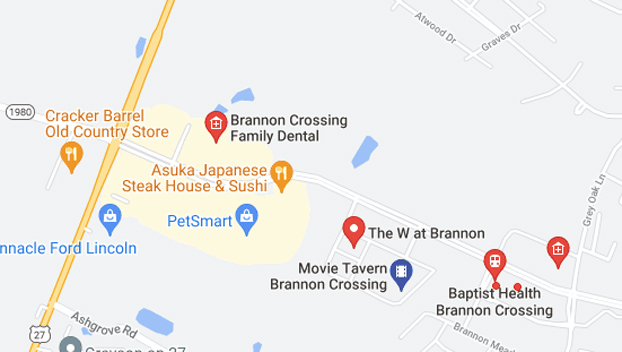 The Nicholasville Planning Commission approved a plan that will complete work on a Brannon Crossing subdivision by adding a retail building. Developer Steven Wright noted that a 1.664-acre parcel behind Jake’s Cigar Bar, 100 Langley Drive, will be developed into a 16,000-square-foot strip center. The property is already zoned retail.

The Nicholasville Planning Commission approved a plan that will complete work on a Brannon Crossing subdivision by adding a retail building.

Developer Steven Wright noted that a 1.664-acre parcel behind Jake’s Cigar Bar, 100 Langley Drive, will be developed into a 16,000-square-foot strip center. The property is already zoned retail.

Wright said the design will emulate that of nearby commercial properties. He told the commission that several businesses, including Posh Salon, Mr. Kabab and Foster Medical Group, have expressed interest in locating in there.

In other development news, two other properties moved forward toward construction.

One subdivision, near the intersection of John Sutherland Drive and Platt Drive, will be developed into townhomes.

The other property of 37.46 acres, stretching between East Brannon and Ashgrove roads, received partial approval of its plans. Jason Banks, with Banks Engineering, said the Commission already approved some of the property for a retirement community. Some of the lots will be for a full-sized, 30,000-square-feet indoor soccer facility and its needed parking spaces.

Banks said the facility will not be maintained by Jessamine County Schools. The hope is that the development in the area will be the catalyst for the building of a new school.

In other news, Tim Cross, planning director, told the board that Nicholasville and Jessamine County would soon need to start work on the Joint Comprehensive Plan. The plan, which serves as a guide for future land-use planning, was last updated in 2017 and is usually updated every five years.

City and county officials plan to meet to get an idea of what work needs to be done, so the Planning Commission can discuss it this month, Cross said.

He said that during the pandemic, Nicholasville did not have a lot of development, most of it was done in the county.

“I’m not sure how much of an update we need to do. Development has kind of stalled out in town,” he said.

When the plan is worked on, a board will be appointed. In the past, it has consisted of three officials each from the county and Nicholasville planning boards, two at-large members and a representative of each government entity, such as town council members and city commissioners, Cross said.

The Planning Commission meets the fourth Monday of each month at 7 p.m.

LG&E and KU encourage customers to prepare for winter…