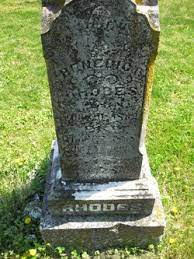 This stone marks the grave of Benedict Rhodes, the victim of the April 1888 murder in Brandenburg, Kentucky.

Jim Ross had no interest in sleeping after his visitors left on the evening of Feb. 7, 1889. He was to be hanged in Brandenburg, Ky., across the Ohio River from Indiana, the following day.

“I’ll admit I was there,” he answered to a reporter’s question about the murder of Benedict Rhodes. “I’ll tell you what happened. I was renting a room at the home of Walter Parker who lived near the dead man. Parker bought this little farm there where he lived. It suited him and his woman but he was having trouble coming up with the money for it. One day he said, ‘I know where we can get the money.’

“He told me that Mr. Rhodes lived alone and kept money in his home. He got Andy Valentine to join in on the scheme and he kept after me too. I know it was wrong but I didn’t think there’d be a killing. I finally agreed I would go along with ‘em.”

Jim Ross then related how they snuck into Rhodes’ house while he was asleep.

Ross said they quietly searched for the money until they heard Rhodes stir about and then turn over in his sleep.

They thought he was waking up so the three of them left the house.

“As we tiptoed across the porch Walt (Parker) stumbled over an ax. He picked it up and whispered, ‘We’re going back in.’”

Ross said Parker lit a lamp when they got back inside and started looking for the money.

“It wasn’t long before Rhodes started stirring again. Parker said, ‘There’s no use fooling with him. We may as well knock him in the head.’

“He hit Rhodes four times with the ax. It was a bloody mess.”

Ross said they continued searching through the house but only found $1.75 and a silver watch.

“That’s the whole truth and nothing but the truth,” Ross said. “I’m gonna hang tomorrow and I ain’t gonna die with a lie in my mouth.”

Ross joined the Catholic Church about a month prior to his hanging after a series of meetings with a priest.

During this time he devoted all of his time to religious matters and was totally candid in discussing the April 6, 1888 murder. He seemed to be unconcerned about his approaching demise.

That wasn’t the case with others as Sheriff J. D. Hardin was deluged with requests for tickets to witness the hanging. Some hangings were public for all to see but some had restrictions for different reasons. If officials felt parties may interfere they could impose restrictions. Many hangings were held within buildings specifically built for the purpose. On some occasions such as with Jim Ross’s hanging the attendees were limited to those receiving tickets to witness the event.

Regardless of the specifics, hangings brought large numbers to town – folks from throughout the area including Hoosiers from across the Ohio River in Indiana. Many of them arrived but didn’t have tickets to witness the hanging.

Several thousand came to town without tickets as they could still witness the entourage of the High Sheriff, deputies and the doomed prisoner. They enjoyed hearing the preaching and praying that was usually part of the goings-on. It wasn’t unusual for the prisoner to ask for and be granted to be baptized.

When death comes calling as it does with all of us… humans often consider what mark they made while they walked on this earth. Some consider their lives have been deficient and seek, at this late hour, peace with Jesus in their hearts. Glory!

Some attendees at hangings longed to hear the final words of the prisoner to be hanged. Does he seem at peace with the Lord?

The attendees in many instances could also view the grotesque corpse after the hanging, contorted face crooked to one side because of the broken, rope-burned neck. At times the eyes were bulging.

Hangings also brought a variety of individuals to town including peddlers, medicine men, bootleggers, gamblers and a hodgepodge of others.

As the execution date neared, Jim Ross could hear the workers building the scaffold and a 20-foot high fence that would surround it. The scaffold was built on a hillside only a short distance from the jail.

Jim Ross was in a surprisingly good mood when guards called on him at 5 a.m. on the day of his hanging.

He ate a hearty breakfast and then smoked a cigar given to him by Sheriff Hardin. The sheriff and Deputy Woolfolk called on Ross soon after 7:14 a.m. and Sheriff Hardin read the death warrant. At 7:40 a.m. they walked to the scaffold, entering the small enclosure that was crammed with humanity.

Ross climbed the steps of the scaffold and then looked about and into the faces of those who came to see him hang.

“Do you have anything to say for yourself,” Sheriff Hardin asked.

“Not a single word,” Ross answered as he reached down and untied his shoes.

A black hood was placed over his head and the noose secured around his neck. At 7:46 the signal was given, the trapdoor opened and Ross plunged through. The rope snapped with a whomp, breaking Jim’s neck. Many witnesses gasped… with their hand holding a rag of sorts daubing at their face. Some looked away to stifle a moan. Soon Jim Ross was dead.

After six minutes a doctor checked his pulse. His pulse rate was 34 and after twenty six minutes there was no pulse at all. Deputies cut the rope and took the body down. The corpse was turned over to a Louisville medical student. Ross had agreed to give his body to the student in the preceding days.

Both Parker and Valentine said they were innocent. Jim Ross was different.

Jim Ross said he wouldn’t die with a lie in his mouth.

Jadon Gibson is a freelance writer from Harrogate, Tennessee. His writings are both historical and nostalgic in nature. Don’t miss a single issue! Thanks to Lincoln Memorial University, Alice Lloyd College, and the Museum of Appalachia for their assistance.