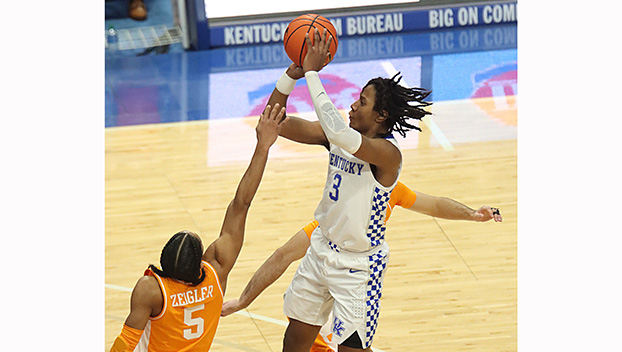 LEXINGTON, Ky. (KT) — Kentucky crushed its oldest rival in a performance late Kentucky coach Joe B. Hall would have enjoyed witnessing as a fan or a coach.

On a day when the Wildcats were mourning the loss of their beloved coach, who died Saturday at the age of 93, the Wildcats defeated their oldest rival Tennessee, 107-79 in a game reminiscent of the many lopsided losses Hall handed the Volunteers during his 13 seasons as coach of the Wildcats from 1972-85.

“It was a game we wanted to win,” Kentucky coach John Calipari said. “… I told (Tennessee coach Rick Barnes) we don’t play much better than we just played.”

The school honored the late coach with a video tribute and a moment of silence prior to tipoff as Calipari watched from the sidelines with a rolled-up program, a trademark of Hall’s during his coaching career.

“This was a celebration for coach Hall,” Calipari said. “… the greatest thing in all this — he knew what people thought and how much he was appreciated and beloved before he passed. He knew and our fans have been so great to him. He’s been a mentor and a friend to me over my 13 years. … I’m going to miss him. To the very end, he smiled. He smiled. (He had) 93 good years, all I can say.”

Calipari plans to honor Hall for the rest of the season by coaching with a rolled-up program, a staple for Hall during his tenure with the Wildcats. Calipari also sprinkled in a 1-3-1 defense on the team’s first defensive possession, which Hall favored on defense. Calipari may tote the rolled-up program for the rest of the season but likely won’t employ the 1-3-1 scheme. 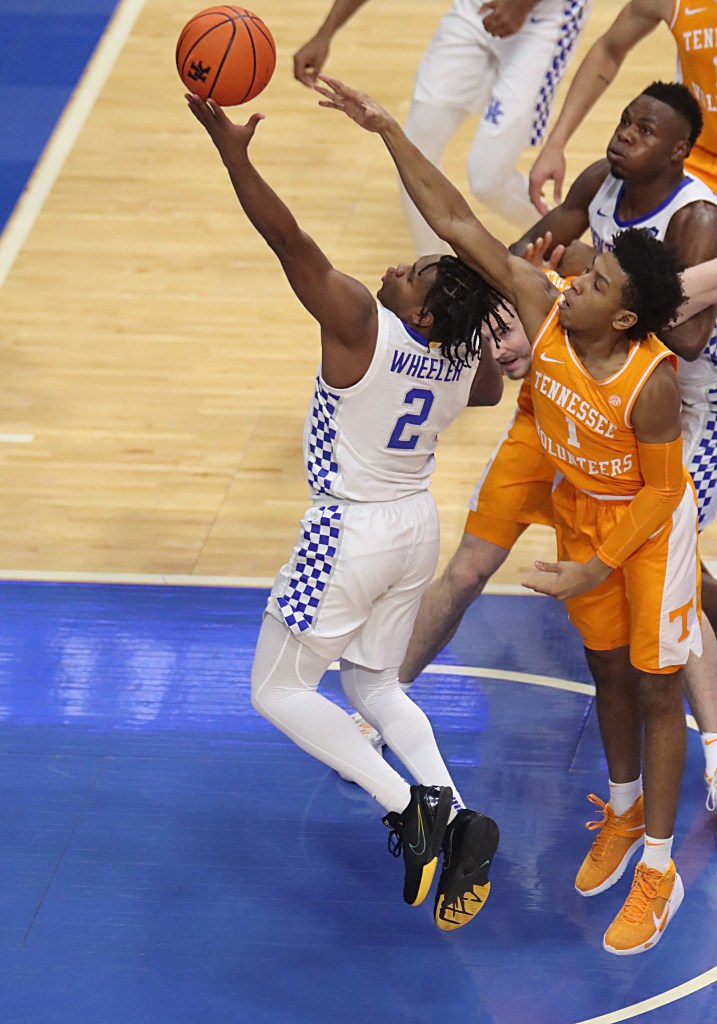 Sahvir Wheeler drives to the basket against Tennessee’s Kennedy Chandler. Wheeler scored 21 points in the win, while also handing out 8 assists. – Photo by Jeff Moreland

Sahvir Wheeler, making his return after missing the previous two games from a strained neck, said the Wildcats wanted to win the game in honor of the school’s longtime coach.

“That energy, that spirit in the air (was here) knowing that we were going to do something special for a great coach who was here, accomplished really big things, and also won a national championship here as well,” Wheeler said.

Tennessee had defeated Kentucky in its previous two games at Rupp Arena, but was no match as the Wildcats extended their winning streak to four games and remained undefeated at home (12-0) this season, giving Calipari his 200th home victory at Kentucky in front of the largest home crowd in two years.

“This is who we are,” Calipari said. “This is how we coach and this is us. This is what it’s about and I want these kids to experience this and this is why you come here.”

TyTy Washington continued his impressive play against conference foes and led the Wildcats with 28 points, Washington made 10 of 13 shots from the field and added five assists. Washington made a case to win league Freshman of the Week honors for the fourth time when accolades are handed out Monday.

Tennessee, one of the top defensive teams in the conference, couldn’t stop the Wildcats, who turned in their best shooting performance of the year. Kentucky shot 68 percent from the field and connected on 11 shots from long range, led by Grady, who made four 3-pointers in the easier-than-expected victory.

“We keep playing like this, we’re not going to be having too many more (losses) for the rest of the year,” Wheeler said. “We played a great game against a great opponent.”