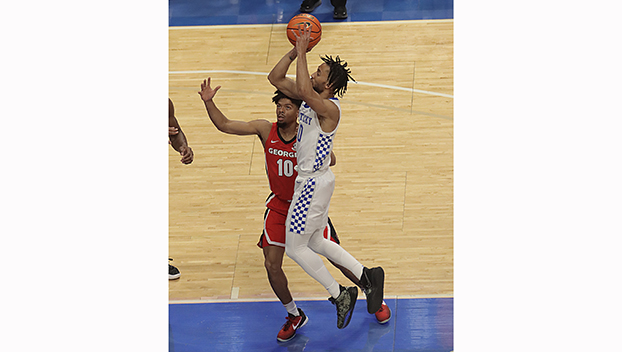 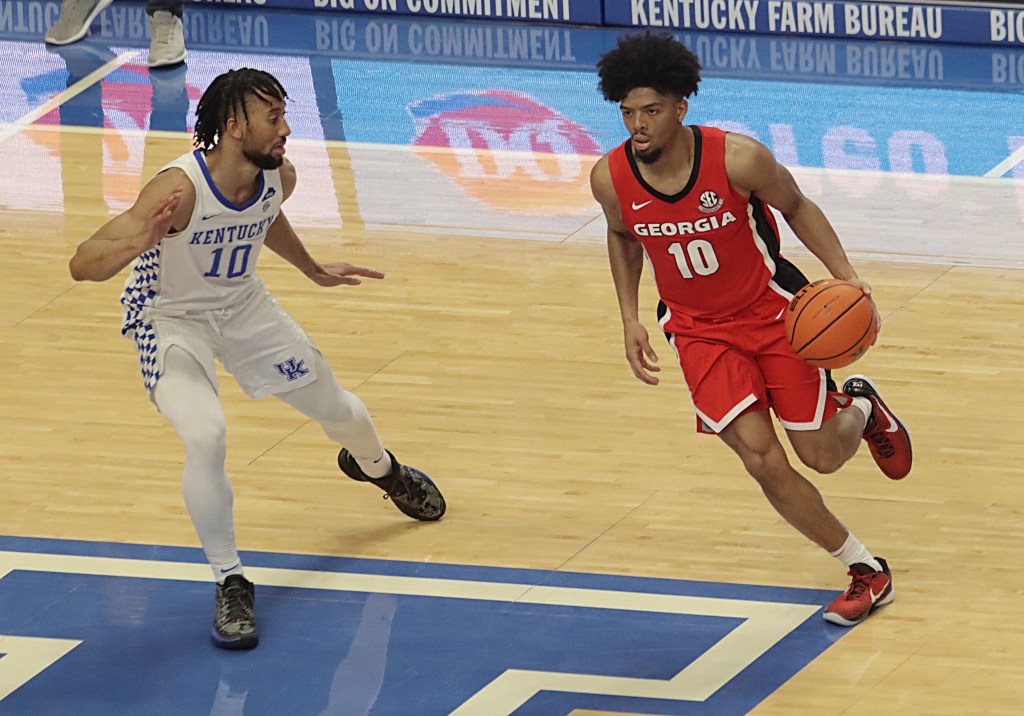 LEXINGTON, Ky. (KT) — Davion Mintz has relied on a higher power when he has struggled at times this season.

“I just put my faith in God,” he said. “I prayed and prayed about it, and I just kept working.

All the signs God was giving me was to just keep working. Don’t stop.”

Even when times were hard, Mintz kept pressing through. He missed three games in November, but slowly got back into a rhythm and has found his groove in a time when the Wildcats have needed him the most. The graduate senior guard has produced valuable minutes off the bench in the absence of Sahvir Wheeler, which has forced freshman guard TyTy Washington to take over the reins at the point-guard position.

In a 65-60 loss at LSU last Tuesday night, Mintz scored 16 points, including the 1,000th of his career, and followed that up with a season-high 19 in a 92-77 victory over Georgia Saturday night. It marked the third straight game the Creighton transfer has scored in double figures and he’s averaging 15 points per game during the past two weeks.

In the win over the Bulldogs, Mintz sank five 3-pointers and he said it “felt amazing” to see his shots fall at a rapid pace.

“It had to pay off,” he said. “I have been working my tail off every day, every night, getting extra shots. (I’ve) just (been) working tirelessly. It can’t rain forever — the sun has to come out eventually, so I was happy to see that.”

In times of struggle, Mintz never lost confidence in his shooting abilities, but admitted it was “tough just getting my rhythm back.”

“I think it was more of a mental thing for me and just getting a groove back and getting to my spots again,” he said. “Then honestly, just confidence — knowing that I’m a shooter, and the team, and coaches don’t care how much I miss, they just want me to keep shooting. So, the encouragement gained my confidence back. So that was my turning point, I knew it was going to turn around.”

He compared his struggles on the court with overall life experiences and said the sport provides valuable life lessons.

“The game of basketball teaches you so much about life,” he said. “You can be putting in so much work and sometimes things just don’t go well for you. But if you just stay faithful and committed to whatever it, is you want in life, it’s going to click. This right here, these past two games, have been a testimony of my hard work honestly and the encouragement from the staff and my teammates really.”

He also has gotten emotional support from his dog Ghost, which Mintz said has been the “secret sauce.”

“When I got ill, Ghost left,” he said. “He was still gone during that period when I was still struggling. He came back just recently — like a couple of weeks ago — everything has been uphill. … It’s been great with him around and he makes everything easier. He’s probably the reason I’m actually playing well.”

Relatively known as a positive person on and off the court, he wasn’t always that way and admitted that he was a “sore loser” at times while growing up, but again, his faith and upbringing kept him grounded.

“I was super into myself,” he said. “It was hard for me, especially having an older brother, I just wanted to be better than him. Just the way my parents raised me and my faith in God, you can’t be a sore thumb on a hand — you can’t be like that.

“I know if I’m at a place where I’m not my best and I’m leaking negative energy that’s going to spread like a virus to other people, even when it’s hard, you’ve got to smile and be happy for others even when it’s not the best for you because it’s going to be your turn and you’re going to be looking for others to clap for you when you’re doing well. That’s all I try to do.”