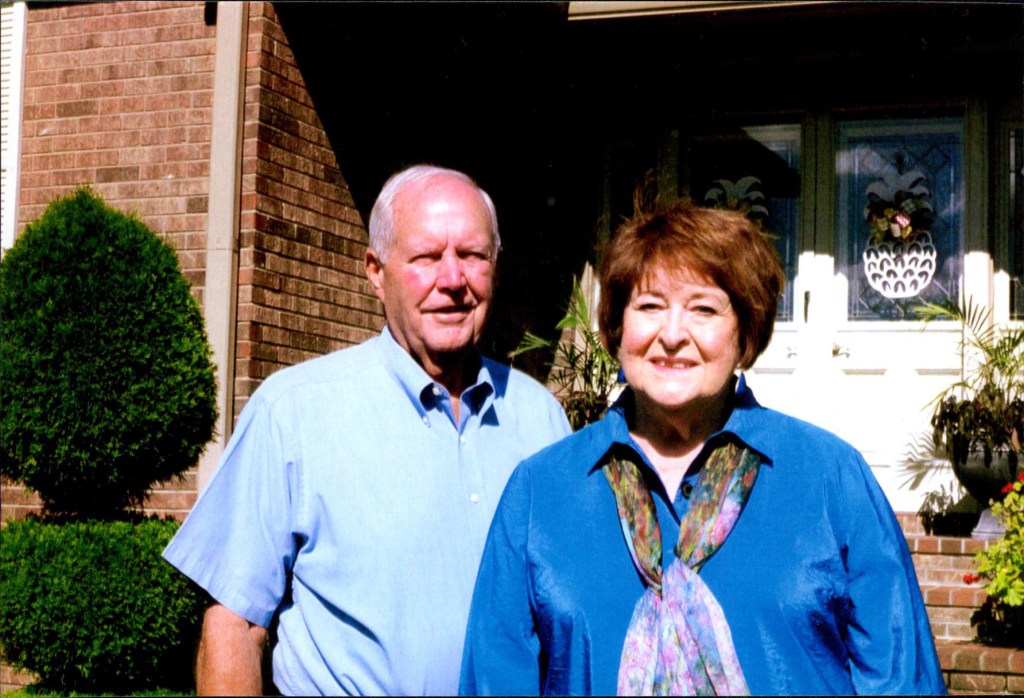 Versatility marks the interesting career of Nicholasville native Bobby Day Wilson. His wife of 56 years, Anna Alexander Wilson, is a worthy complement in all family endeavors.

They met at Transylvania University and married in 1965. That was two years prior to her graduation with a double degree in English and History. He earned his diploma in 1964 in Economics and advanced to Georgetown University for a Master’s in Education.

“I never would have attended Transylvania without a scholarship,” Wilson declared. “The grant was for Music. I played trumpet in the Kentucky Youth Orchestra four years. I learned at a young age. I was a Jessamine County High School Band member.”

Armed with necessary studies preparation, Bobby Day Wilson launched a 56-year work and service agenda. It started with a teaching job at JCHS in Government and Civics in 1965. He tutored in the classroom and assisted Coach Elmer Stephenson in development of the Colt football program. Education practice was laid aside after three years. Teaching teenagers was followed by establishment of an initial business venture in 1969. Wilson Insurance Agency emerged. Wilson was an agent for Nationwide Insurance two years.

Between 1990 and 2010 business transactions, divestment, and merger, all business property and equipment of Wilson on Edgewood Drive. RE/MAX ELITE became sole owner of the 206 Edgewood Drive office building. Wilson announced, “I am a real estate agent for RE/MAX.” He added, “The Wilson Auction Company continues in business at the site.”

Fulfilling an inner desire to sustain quality family life in his native county and urged by supporters, the disciplined operator in 1992 declared his candidacy for public office. Wilson was elected. Voter action had enabled the start of a 21-year stint as magistrate with Jessamine Fiscal Court in 1993. Wilson served honorably in District 1 which represents half of the residents in Nicholasville. The six-member county governing body during Wilson’s five elective terms enjoyed sound leadership from County Judge/Executive William Neal Cassity.

Questioned on what he remembers vividly that highlighted county government legislation, the 78-year old ex-official quickly responded: “We cut real estate tax on personal property 2 percent.” He added, “We did that in the late 1990s without reducing services. Magistrates approved the measure by unanimous vote.” This accomplishment is shared by satisfaction he treasures in over 50 years of real estate negotiation locally and over Central Kentucky. Prompted to release details, Wilson hesitated. “… Well over 1,000 home, business, and industry sales were transacted… that’s a conservative estimate,” he figures. Mrs. Wilson interjected: “That’s a low estimate. It’s probably more like 2,00 property sales.”

Bobby Day Wilson was an outstanding three-year regular on Nicholasville and JCHS football teams coached by Elmer Stephenson. He was a sophomore tackle on the 1957 NHS eleven that astonished state gridiron prep school experts. The shocker was a 28-20 upset of Madison Model High School October 18 at Hanger Field in Richmond. The vanquished team was undefeated and ranked Number 1 going into its 8th contest. The following 1958 season county schools were desegregated and JCHS absorbed Nicholasville, Wilmore, and Rosenwald Dunbar high schools. NHS ended the 1957 season with a 7-2 record.

This was an outstanding high school football team. In eyes of fans and booster the 1957 NES edition of warriors was near majestic. Only two touchdowns separated the tea from being undefeated at 9-0 and historical sports fame in Jessamine County. Harrodsburg ecked out a 20-14 road setback. Mount Sterling escaped 6-0 on Nicholasville’s old field between Broadway Extended and Cypress Street. In the controversial loss to the latter visitors, Nicholasville was poised inside the final minute of the 4th quarter at the opposition 1-yard line after a lengthy drive. As both teams aligned for a final anticipated play an official snatched the football into his arms and declared the game ended. That edition of Coach Stephenson was very young with only six seniors on the roster.

While not visible in business and politics like her husband, Anna Wilson was a significant figure in community affairs and development of young minds. She accomplished such standards by a 27-year teaching career, over 50 years of faithful church membership, and 25 years as trustee on Jessamine County Public Library Board. That service list could be expanded. Mrs. Wilson was coach of cheerleaders and majorettes. She was a president of Nicholasville Younger Woman’s Club. Anna and Mary Jean Blackford co-chaired an All Kentucky City program which brought Nicholasville an award in 1975.

She did comment on family loyalty to Nicholasville Christian Church. Speaking for spouse and herself, Anna noted, “We’ve done about every kind of job the church has to offer.” Bobby Day chimed in, “That’s my church. I was born there. I attended in arms of my parents. It will always be my church.” Both smiled in unison over the mutual devotion.
Asked to share one of her lifelong highlights, Anna laughed as she thought back to 1962-1963, a college freshman time. “I was surprised and flattered to be invited by the late Bill Embry to model for his woman’s fashion stores in downtown Lexington. Mr. Embry was the owner or organizer for six retail outlets, including Embry’s and Wolf Wiles,” Anna informed. “I modeled with several other non-professionals at all of them. I was 18,” she continued. “It was a lot of fun. And I got paid.”

Graduated from Transylvania in 1967, the multi-talented native of Glasgow, Kentucky recalls her starting employment. “I graduated on Saturday. I started teaching full-time Monday at Jessamine County High School. The principal was Billy Lockridge. I was teaching Sophomore English.” Classroom duty was interrupted in 1970 due to birth of a son, Nathan Wilson. Teaching resumed until a second son, Adam Wilson, was introduced in 1975. Twenty-two years of instructing pupils followed. Retirement became a reality in 2005.

The two Wilson boys graduated from JCHS and are now productive and successful. Both played football for the Colts. Nathan secured a diploma from Asbury University in 1993 in Psychology. Masters of Divinity followed from Lexington Theological Seminary. He married the former Janic Legalski of Michigan. They have two daughters. Nathan currently is service World Council of Churches in Geneva, Switzerland.

Adam gained a Communications Degree from Asbury in 1997. He is now an audio-visual engineer with Davis Elliott/Studio 46 in Lexington. He wed the former Delena Brown of Florida. They have three children.

Music and activities occupied the former Anna Alexander when she was a secondary school student. A graduate of Glasgow High School in 1962, Miss Alexander was a saxophone talent in the Scottie Concert Band and Dance Band. She was a majorette in the Glasgow Marching Band. Anna may have been following a trend set by three elders in education, all from Glasgow. The record shows at least two Barren County teachers preceded her relocation here in pursuit of work opportunity. The third educator, her sister, followed. The sister was Pat Alexander Nielsen, seven years Anna’s senior, who held a Masters in Physical Education from Indiana University. Mrs. Nielsen also possessed a Master’s in Administrative Education. At JCHS she elevated to vice-principal and principal over 15 years. She retired in the 1990s, according to Anna, and now lives in Lexington.

Sammy Sears and wife Grace, both deceased, came to Nicholasville in the 1957 administration of School Superintendent Roland Roberts. Head football coach at Glasgow High School in 1955, Sears accepted a position in the Central Office with Roberts, then located on Court Row in Downtown Nicholasville. Leonard Cavil arrived in town around the same time frame as Sears. He was basketball coach and teacher at Glasgow Ralph Bunch High School in 1955. In Nicholasville he coached sports teams at Rosenwald Dunbar High School. After consolidated schools in 1958, Cavil mentored sports teams at Jessamine Junior High and later taught and coached at Jessamine County Middle School.

Mrs. Wilson remembers the county judge of Barren County with an office in Glasgow during her teenage years was Louie B. Nunn. The staunch Republican politician did generate a favorable tone in the Alexander family in those days, she testifies. “Louie was a close family friend and frequently in our home… no concern my dad was a Democrat,” she added. “And, dad was the Barren County sheriff for about 16 years.” Nunn was elected Kentucky’s governor in 1966 and served through 1970. Sheriff Robert O. Alexander provided paternal guidance for two sons and four daughters, Anna said. Her mother was Margaret Matthews Alexander, described as “a stabilizing influence at home and a county native.”

Ray W. Wilson, born near Nicholasville’s western boundary, was the father of Bobby Day Wilson. “He was a machinery operator,” the son said, “and a hard-working man.” He died in 1987 at age 73. Evelyn Day Wilson, Bobby Day’s mother, came to Nicholasville at an early age. She had roots in Eastern Kentucky. She delivered a first-born daughter to the family, Bobby Day noted, and Nancy Wilson was married to Lonnie Myers. They made their home in Nicholasville. Both sister and mate are now deceased.

Football playing days with the JCHS Colts ended with the final 1959 game for Bobby Day Wilson. However, a one-game extension was in the works. Post-season honors included his selection to play tackle in the Kentucky High School East-West All-Star Game. It was a fitting reward for the dedication and grit of the 6-0 foot, 190-pound athlete. Wilson suited up with East All-Stars for the contest at old Stoll Field in Lexington.

Time has obscured his vivid recall of football action in that annual classic. “But it was in late summer of 1960… probably in August,” Wilson said. “It was hot!” a reference to on-field heat. “The East won. I can’t remember the score.”