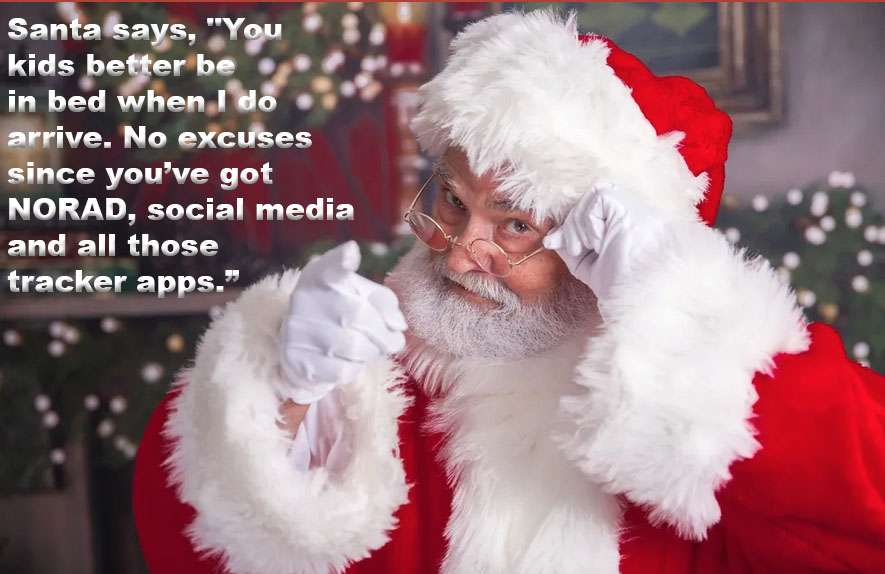 Christmas Eve is Friday, the day Santa travels across the globe to deliver presents to children living near and far.

The North American Aerospace Defense Command, better known as NORAD, has been keeping track of Santa’s movements for more than 60 years. NORAD’s website and social media allow families to track Santa’s progress as he and his team of reindeer navigate the globe’s 24 time zones.

Jessamine Journal asked Santa how he feels about NORAD’s surveillance.

“I’ve long been well aware of how NORAD is tracking me and my sleigh,” Santa said to the Sun in an exclusive interview as he was busy loading his sleigh. “I’ve been doing this a long time. Mission is always the same — 24 hours to cross the globe and spread Christmas cheer. Despite the federal government’s technological advances in global surveillance, I can come and go as I please. I’m Santa! Besides, I know who’s been naughty and nice. Think about that NORAD.”

NORAD defends North America using an all-domain and globally integrated approach to track everything that flies in and around Canada and the United States, according to NORAD’s website. Origin of this special mission to track Santa began in 1955 when a small child tried to reach out to him. More on that in a minute.

Jessamine Journal asked Santa about his mission to spread joy, perhaps gain a timeline as to when he’ll be in Kentucky.

“I can’t wait to visit the homes of boys and girls in Jessamine County,” Santa said. “Not sure when me, Buddy the Elf and Rudolph are going to get there on Christmas Eve, but you kids better be in bed when I do arrive — No excuses since you’ve got NORAD, social media and all those tracker apps.”

Tracking Santa is now easier than ever, at least easier than it used to be while watching television when there were only three or four channels with network anchors using NORAD to forecast Santa’s progress.

Children and the young-at-heart can go to https://www.noradsanta.org to follow Santa, or they can use one of NORAD’s social media sites or call NORAD at 1-877-HI-NORAD for a real-time update.

In 1955 a young child, trying to reach Santa, dialed the misprinted phone number from a department store ad in the local newspaper (not the Jessamine Journal), according to NORAD. Instead of calling Santa, the child called the Continental Air Defense Command (CONAD) Operations Center in Colorado Springs, Colo.

Air Force Col. Harry Shoup, the commander on duty that night who answered the child’s phone call, was quick to realize a mistake had been made and assured the child he was Santa, according to NORAD. After more incoming calls, Shoup assigned a duty officer to continue answering calls and a tradition was started that continued when NORAD was formed in 1958.

Each year since, NORAD has dutifully reported Santa’s location on Dec. 24 to millions of children and families across the world. Because of the support, services and resources generously provided by volunteers and our government and corporate contributors, NORAD Tracks Santa has persevered for more than 65 years and is recognized as one of the Department of Defense’s largest community outreach programs, according to NORAD.

Epilogue — that kid who made the initial call to Continental Air Defense Command seeking Santa would later hack into the Air Force’s computer mainframe servers by accident; nearly started a nuclear war and was until recently on Santa’s naughty list. Google Matthew Broderick and WarGames.
Merry Christmas from the Jessamine Journal!

Editor Miles Layton can be reached at miles.layton@winchestersun.com