A disruption in the schedule hasn’t been a distraction for Kentucky.

The Wildcats (9-2) remained undefeated against replacement opponents following a 95-60 win over Western Kentucky Wednesday night. Kentucky was scheduled to play instate rival Louisville, but the game was canceled because of COVID-19 protocols and the Hilltoppers made the trip to Lexington to replace the Cardinals.
Kentucky coach John Calipari wasn’t surprised by his team’s ability to flip the switch and prepare for another opponent at the last minute.

“I’ve got a very smart basketball team,” he said. “This is crazy. I’ve got some older guys that understand how to be engaged, how to be laser-focused. … I’ve got a veteran group.”

Just as they did against North Carolina, another replacement team on the schedule in last Saturday’s CBS Sports Classic in Las Vegas, the Wildcats made it look easy despite lack of preparation time.

This time it was veteran Kellan Grady who provided the fireworks for Kentucky. The Davidson graduate transfer poured in 23 points and sank six 3-pointers in his best performance as a Wildcat. Calipari challenged Grady to take more shots or spend more time on the bench and the Kentucky guard chose the former.

“It’s great to have a coach that believes in you and wants you to shoot,” Grady said. “I’ve just got to be ready to shoot.”

Although he was matched up with Western’s 7-foot-5 center Jamarion Sharp, Oscar Tshiebwe set a Rupp Arena record with 28 rebounds and added to his double-double performance with 14 points.

“For me, I’m just going to go out there to fight,” he said. “I don’t care about points, I just want to go out there and grab and get rebounds … that is helping us to win the game.”

“It’s incredible,” Grady said. “His will, his motor and his effort. It’s contagious when we see how hard Oscar plays. He’s by far the best player on the court.”

Sharp left the game early in the second half because of an apparent ankle injury and didn’t return to the lineup. Tshiebwe outrebounded Western’s entire squad, which finished with 27 total rebounds.

TyTy Washington followed Grady with 20 points, while Jacob Toppin came off the bench and collected 12 points, while dishing out six assists and throwing down three dunks.

Western, coming off an 82-72 win over Louisville, struggled to retain the energy it displayed agianst the Cardinals. The Hilltoppers (8-5) scored the first five points of the second half and trailed 37-33 but Grady made two 3-pointers in a 12-0 run that pushed the lead back to double digits.

That’s all Kentucky needed to snap the Hilltoppers’ three-game winning streak in the first meeting between the two teams in nearly a decade.

Calipari praised his team’s 27 assists, which was more than his goal of 18-20 assists per game as a big reason behind his team’s success.

Western Kentucky struggled from the field and shot only 33 percent. The Hilltoppers were 3-of-20 from the three-point line and were led in scoring by Josh Anderson with 18 points, followed by Cameron Justice with 13.

“We played well,” Calipari said. “They beat Louisville — by 10. … (Rick Stansbury’s) team is good. That’s an NCAA Tournament team … and we beat them pretty good.”

“Sometimes you’ve just got to say the other team was better. And they were better in every area,” Stansbury said. “Again, I don’t have any answers for everything they did. But I just know when they play like that, they were the best team in America today.”

The Toppers coach said he’s glad the game was played especially with the special circumstance of raising money for the tornado-stricken in the state, including Bowling Green.

“Give Kentucky a lot of credit for their willingness to play this game. They didn’t have to play it,” Stansbury said. “Their willingness to donate some money to our community and the state of Kentucky. I told Cal, they had nothing to gain by playing the game. He knows that and that’s why he hadn’t played it. So give him credit. But today, we had no answer.” 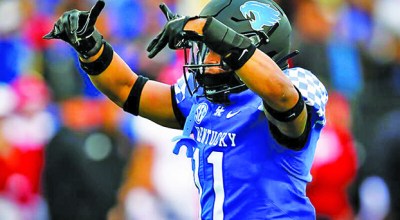