State Capitol building on lockdown after shots fired near area 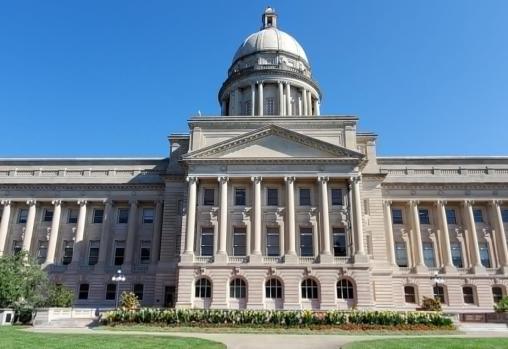 State Capitol in Frankfort was on lockdown Tuesday morning after shots were fired in the area. (Kentucky Today file photo)

FRANKFORT, Ky. – The State Capitol building has been placed on lockdown Tuesday, after a police chase that ended with shots being fired near the building, according to multiple reports.

Two men were fleeing from police in a stolen vehicle before stopping on Leawood Drive, according to Frankfort police. The men fled the vehicle on foot, while one man shot at officers. That man is reportedly in custody, while the other one is still at large.

A State Journal reporter noted that a drone was aiding in the search for the other suspect. Police said the public is not in danger.

The names of the suspects have not been released by law enforcement.

The Capitol Annex was also placed on lockdown, as the armed suspect was in the garage at one point.

Officers were called to the area Tuesday morning after receiving a stolen vehicle complaint. An officer allegedly located the vehicle around 8 a.m. parked on Leawood Drive.

In a statement, Gov. Andy Beshear’s office said: “The Governor appreciates the professionalism and swift response from the Frankfort City Police, the Franklin County Sheriff’s Office and the Kentucky State Police.”