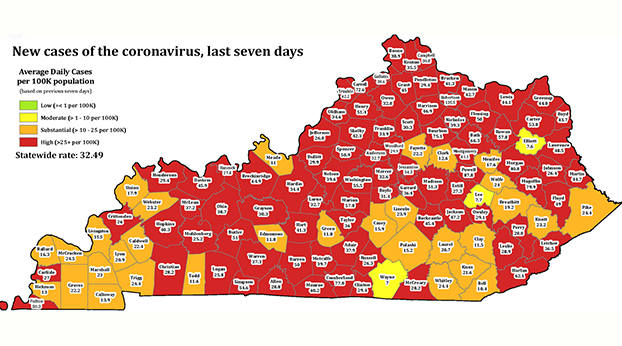 As Kentucky heads into a cold Thanksgiving weekend that is sure to keep family gatherings indoors, the metrics to measure the coronavirus continue to go up: New cases and infection rates are up, the share of Kentuckians testing positive is up, and Covid-19 hospitalizations keep rising at an accelerating rate.

The percentage of Kentuckians testing positive for the virus in the past seven days is 6.77%, up from 6.56% on Monday and 5.05% three weeks ago.

The number of counties with more than 25 daily cases per 100,000 people also keeps ticking up. The state infection map shows those counties in red to indicate the highest category of transmission. Today, 86 of the 120 counties are red, up from 81 Monday; 31 are in the orange zone (“substantial” transmission) and only three are in the yellow (“moderate” transmission): Elliott, Lee, and Wayne.

The state’s daily report showed 217 Covid-19 patients in intensive care, up 14 from Monday, and 98 on mechanical ventilation, down 3. Eight of the state’s 10 hospital readiness regions are using at least 80% of their intensive-care beds, with three above 95%: Barren River, Northern Kentucky and the easternmost region, stretching from Lee County to Pike County.

There was at least one spot of good news, according to a Facebook post by Gov. Andy Beshear: Kentucky ranks first in its region and above the national average in the percentage of fully vaccinated residents who have gotten a booster shot. On Monday, Beshear said 504,028 Kentuckians had gotten a booster. So far, 2.65 million have received at least one dose of a Covid-19 vaccine, or 59% of the total population.

The state reported 53 more Covid-19 deaths Tuesday, raising the pandemic death toll to 10,760. One of the victims was 25 years old, Beshear said.

Today’s reported deaths tie for the 13th deadliest day of the pandemic. The seven-day death average is 43 and the 14-day average is 40, based on counting 140 of the 212 deaths reported Friday as deaths found by rechecking death certificates dating back to 2020.

Health Commissioner Steven Stack has warned that the Covid-19 death toll will continue to be high over the next few months because of the recent surge in cases and expected further surges.

In other pandemic news Tuesday: Attorney General Daniel Cameron has challenged President Biden’s mandatory vaccination requirement for healthcare workers in facilities that get Medicare and Medicaid funding. Cameron joins 13 other states in the lawsuit, which argues that the mandate is unlawful and unconstitutional, and that the Centers for Medicare & Medicaid Services lacks authority to issue it.

Approximately one-third of Kentuckians are covered by the Medicaid program. In the state fiscal year ended June 30, the state received more than $12 billion in federal funds for Medicaid, and Medicaid funding accounts for more than 25 percent of the state’s total budget.