Cook could be another Arizona Compass player to shine at Kentucky 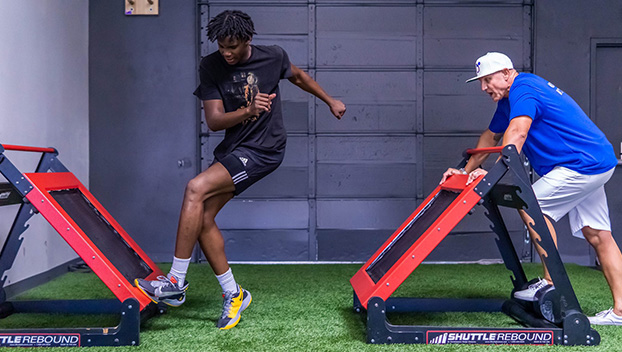 It was about a year ago that Pete Kaffey, program director at Arizona Compass, was telling anyone who would listen just how good point guard TyTy Washington was.

“He’s a big, long athletic wing that can play four positions,” said Kaffey. “He’s a great teammate. He plays well on both sides of the ball. He competes at a crazy level every day. He’s a really good passer.

“He’s a five-star player for a reason and he’s getting better every day. The kid has put himself in a position to where he can play at a place like Kentucky and maybe be a high draft pick one day.”

Cook already has over 20 Division I scholarship offers, including one from Kentucky. The only official visit he’s taken so far is Kentucky.

Kaffey says Cook’s versatility makes him different. At 6-7, he can initiate the offense and he can go inside to guard bigs.

“He can score. Defensively, he’s just a monster because of the energy he has. I watched him volleyball a kid’s shot off the backboard in practice and then get out on the fast break to finish it with a tip dunk. He just has that kind of motor, but he also has a pretty high basketball IQ. I really think he’s a prototypical NBA wing.”

Kaffey said Arizona Compass coach Ed Gibson gets players to play with a purpose, something that helped Washington. This is Cook’s first year at Arizona Compass after he played the previous two years in Oregon.

“These kids come here to compete and get better. He’s very coachable. He is 6-7 and jumps like he has a trampoline in his shoes,” Kaffey said. “He really passes the eyeball test. He looks like that sexy girl on the beach that makes you just say, ‘Wow,’ when you see her. Mookie is the same way when you see him in the gym and he’s always working hard to get better.”

Recruiting is going well for Cook who leans on his family to help him with the process.

“I know he embraces the recruiting process but every school that lays eyes on him offers him,” Kaffey said. “He’s ranked where he is for a reason.”

Kaffey admits that a program like Kentucky with its history resonates with Cook.

“He has other great universities recruiting him but it is Kentucky,” Kaffey said. “It probably helps that he is friends with TyTy and Mookie can call him and get feedback.

“Over the past few months since we got in contact with Kentucky about him a lot of other people have called and let them know about him. I’ll just say for me it’s kind of the same way I told them about TyTy and now he’s the best player at Kentucky. Mookie could be the same way.”

Kentucky fans will have a chance to watch Cook and Arizona Compass play during the McCracken County Mustang Madness Jan. 6-9. By then 6-2 junior point guard Kylan Boswell might also have a Kentucky offer.

He was regarded as the top sophomore in California last season before transferring to Arizona Compass.

He led his 16-and-under team to a EYBL championship and also made the USA Under-16 team. Boswell has got recent scholarship offers from Michigan, Florida, Oregon, Auburn and Arizona State to go with ones he already had from Kansas, Louisville, Illinois, Creighton, George Mason, USC, UCLA, Texas, Arizona, Texas Tech and Stanford

“Kylan doesn’t have a Kentucky offer yet but he is a no-brainer,” Kaffey said.