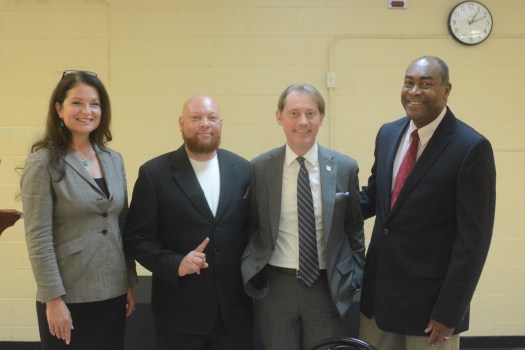 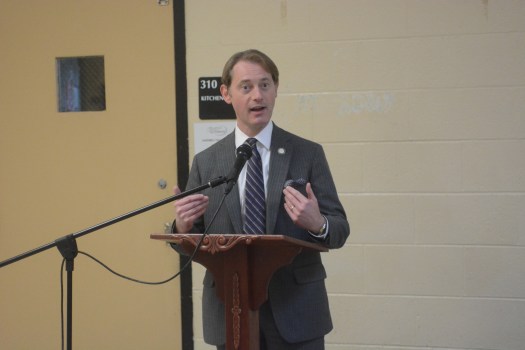 Kentucky Secretary of State Michael Adams was present at the Wilmore Municipal Center to introduce the candidates for the 2021 Special Election. (Photos by Dillan Combs) 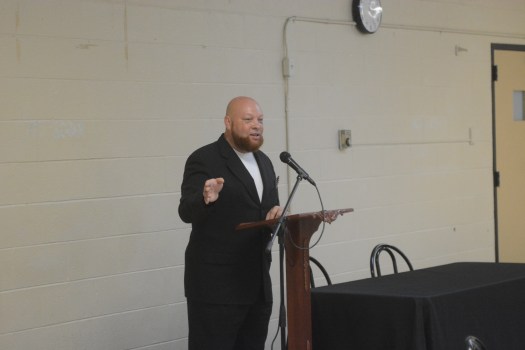 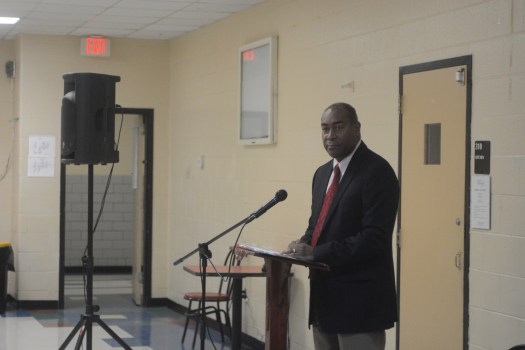 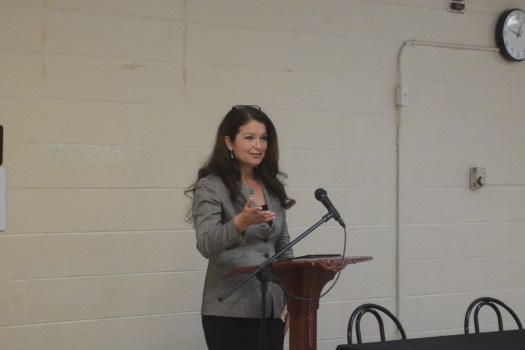 Candidates vying for the role of District 22 State Senator visited the Wilmore Municipal Building at noon Friday to discuss their backgrounds and ambitions before the 2021 Special Election. The 22nd District comprises of Wilmore, Nicholasville, Lancaster, Burgin, Harrodsburg, Mackville and Springfield.

Sindicat “Sid” Dunn (independent write-in,) Dr. Donald Douglas (republican) and Helen Bukulmez (democrat) are campaigning to carry out the final year of State Senator Tom Buford, who passed away in July before the completion of his most recent term.

“Tom Buford was a great friend of mine,” said Dunn, the first of the speakers. “Tom was a friend of everybody. To run as an independent gives me the opportunity to lead in that same way he did by making the right decisions for the people. I don’t feel like I’m tied to a party, and I do respect both parties, republican and democrat.”

Dunn served ten years on the Burgin City Council. He spoke of his initial decision to abstain from running, citing his friendship with Buford. After encouragement from a friend, however, Dunn chose to participate in the election.

Four hundred million dollars will need to be allocated for the next Legislative Session in Frankfort, and it is within education that Dunn wishes to allocate it.

“Some of the ways I’m looking to allocate it is not giving it away,” said Dunn. “I think our children have been affected by Covid more than anything. I think we need to invest this money into our school system and into education.”

Before leaving the podium, he advised listeners to “write-in Dunn and be done.”

Douglas followed after Dunn and spoke of his upbringing experiences.

“I want you to know I am a conservative, republican, and a Christian. I’m also a husband, a father and a physician,” he said.

Douglas has lived in Jessamine for approximately 13 years, after raising his children in Fayette County. He grew up as the 14th of 16 siblings just outside of Owensboro. Currently, he is the medical director at Tony Delk IMAC Regeneration Center out of Lexington.

“I became the first black American who was class president at the University of Kentucky medical school,” said Douglas. “People talk about racial issues. Sometime you and I can sit down and talk about some of those things. I’ve been called things I never would say anywhere else. I’ve learned to accept that. I’ve learned to educate others regarding that. And that’s why I feel a little more successful than some of the others.”

Douglas brought up the issue of jail funding, citing that counties are burdened by having to fund jails alone.

“What I’ll do is work with the Governor – whatever governor’s in. We’ll try to bring in some discretionary funding. To help ease some of those burdens. Same thing with our ambulance services,” he said.

Additionally, Douglas stated that funding needs to go into both dependent and independent nursing home services

“I’m here to represent the entire 22nd District, regardless of party. I’m here for consensus, I’m here to bring us together,” Douglas added, ending his speech.

Finally, Bukulmez of starting as a single mother in Turkey, earning US citizenship and becoming a successful attorney.

“We need a leader like Tom Buford, who put the interest of people above and beyond any political differences,” she said. “He worked for the people, he was loved by the people, and he found solutions. He found ways to bring people together at the table. My prayer here today is to serve as lovingly as he did.”

Bukulmez came to Kentucky after facing oppression in her home nation of Turkey. She learned English through the University of Kentucky, intending to become a businesswoman and to take care of her son.

“I worked really hard, it was really challenging,” she said. “At times I used three dictionaries to be able to understand the content. Regardless, I graduated top of my class in law school and became a proud Kentucky woman. Ever since that 2009, I have represented the people – only the people. Not the big pharma, the wrongful entities, or the large corporations.”

That served as Bukulmez’s focus during her speech – to prioritize the needs of the working class over pharmaceutical companies, insurance companies, and other powerful entities.

“Every morning I get up to look out the window and look at all those rolling hills and hollers, and I say ‘thank you God, thank you America, thank you Kentucky for giving me a second chance at life,’” she said. “And I will, for the rest of my life, fight for you, because you have given me love. You have given my son a future I could not possibly imagine he would have one day.”