UK players know they can compete with Georgia 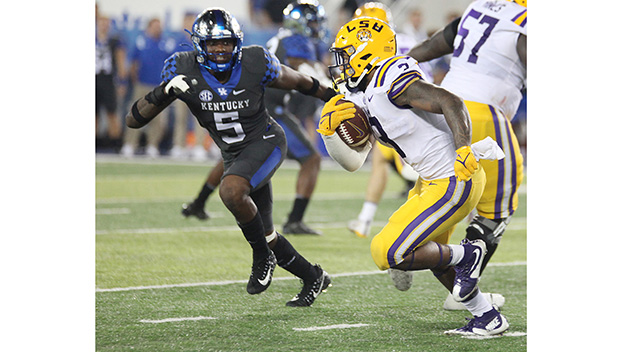 Kentucky will play at No. 1 Georgia Saturday afternoon and both ESPN Gameday and SEC Nation will be on hand for the game that will likely decide who wins the SEC Eastern Division. Both teams are unbeaten — the only SEC teams without a loss — and it will be the first time No. 11 UK has ever been part of a game in which both teams had at least a 6-0 record.

Three years ago No. 9 Kentucky faced No. 6 Georgia for the SEC East championship at Kroger Field and the Bulldogs won 34-17.

Linebacker DeAndre Square, UK’s leading tackler, remembers that game and insists it will be different this week.

Former all-SEC running back Anthony White believes Georgia might be more apprehensive about the game than Kentucky.

“Georgia is probably more scared. We know how good Georgia is. We don’t even know yet how good we are,” White said. “Georgia knows about our pushing and shoving (running game) but now they have to wonder what else they have after the LSU win. We closed out that win against good SEC athletes.”

Kentucky junior running back Chris Rodriguez, the SEC’s leading rusher with 759 yards (6.3 yards per carry), had 147 yards and one touchdown on 16 carries against LSU and also caught a touchdown pass.

“We know what we have planned next weekend. We like to say we have a 24-hour rule, like yeah we just had a great win, but once the 24 hours are up, it’s on to the next one,” Rodriguez said. “I’d say everybody is clued into what we want to do, and everybody wants to win. It’s a player-led team, and rather than the coaches having to get us hyped or anything, I feel like we know what we’ve got to do to win.”