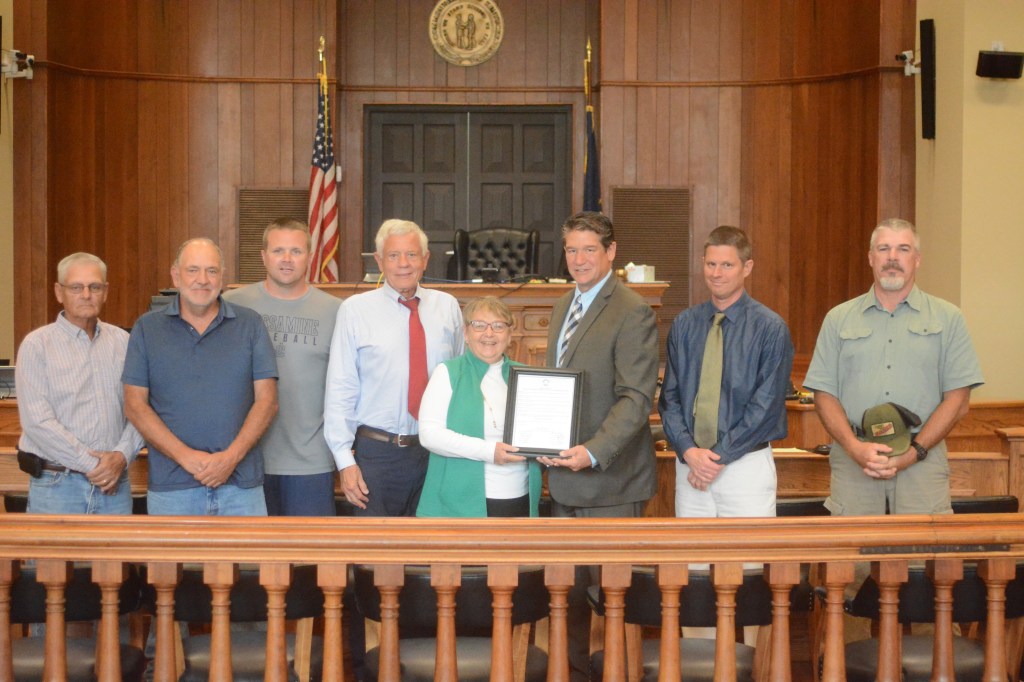 President of Kentucky Women in Agriculture, Babette Overman, accepts a plaque from the Jessamine Fiscal Court honoring her organization for its achievments in expanding the horizons for women in the agricuture profession. (Photo by Dillan Combs)

“There’s growing influence of women who serve as leaders and primary decision-makers on Kentucky farms,” said Jessamine Judge-Executive David West. “Kentucky has 40,000 female farm operators that make up nearly a fourth of all farm operations in our state.”

The proclamation was signed by the Judge-Executive and magistrates during Tuesday’s regular Fiscal Court meeting. Members of KWIA were present during the meeting, with the organization’s president, Babette Overman, speaking publicly.

“[KWIA] started as a simple idea,” she said, ‘why aren’t more Kentucky Women recognized for their efforts’.” It was this mantra that defines the goals of KWIA.

The nonprofit organization seeks the professional development of its members, preparing women of any age for leadership roles in the agriculture field at county, state and national levels. It promotes educational opportunities that advance the interests and welfare of members, educates members on policy and legislative processes, brings awareness to issues surrounding agriculture, and acts as a liaison between its members and entities interested in the sustainability of agriculture.

KWIA is currently prepping for its 22nd annual conference at the Clarion Hotel in Lexington, taking place on Oct. 19. Numerous awards will be given out to recognize KWIA members and non-members who make significant contributions to their community, region, state, and nation.

“We are proud to give this proclamation and we recognize that women work back home on the farms as much as the men,” said Judge-Executive West.

For more information on KWIA, visit their website at kywomeninag.com.