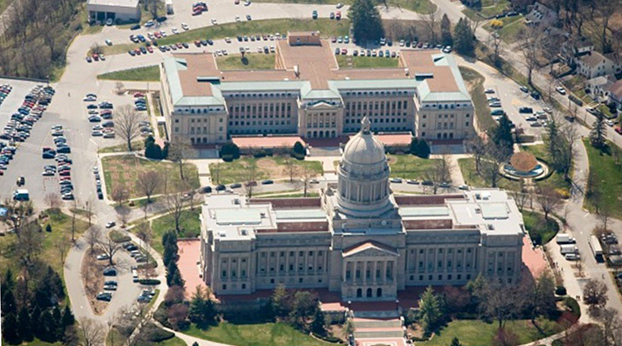 The loop around the State Capitol in Frankfort will be closed for security reasons. (Swiftroofing.net photo)

Much like Pennsylvania Avenue in front of the White House was closed to vehicular traffic over 25 years ago in Washington, D.C., security considerations will result in the closing of part of Capital Avenue in Frankfort, Gov. Andy Beshear announced on Monday.

“Upon the recommendation of the Kentucky State Police and our federal security partners, the Finance and Administration Cabinet’s Department for Facilities and Support Services, we will be seeking a request for quotes for the installation of bollards on the grounds of the Kentucky State Capitol,” Beshear said.

They will be installed on what is known as the Capitol Loop, between the State Capitol and the Capitol Annex, from the Floral Clock to the Rose Garden, which means drivers will have to go behind the Annex to get from the west to the east side of the Capitol.

“It has been reviewed as a security concern,” Beshear said, “and as a threat for being far too close to both the Capitol and the Annex. Legislators have been briefed, security groups have been consulted. This is one where we want to do it before there is a tragedy, and not wait until after.”

Beshear said the move will protect everyone who comes to the Capitol, employees and visitors alike. “After what we saw on January 6 at our U.S. Capitol, we have to be proactive in making sure that everybody here is safe, and this is one important step in making that happen.”

This will be the second major security upgrade in the last year and a half on the State Capitol grounds. During a May 2020 demonstration, armed protesters crossed barriers to reach the front door of the Governor’s Mansion and rapped on the glass trying to get Beshear to come out. Reportedly, he and his family were not home at the time.

The governor noted the fence erected around the mansion grounds in the wake of the incident. “They’ve been recommending that for a long time, and at that so-called militia rally, we saw a good reason why it needed to be there.”

He added, “We ought to expect it to be happening here pretty soon, and the contract will be awarded we hope after it is out in short order, and we’ll all be safer for it when visiting the Capitol or working here.”