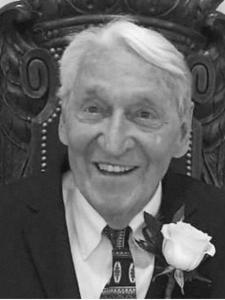 C.V. Collins passed away peacefully at home on Sunday, August 29, 2021. C.V. was the son of the late Boyd and Mary Edith Collins of Jessamine County, KY. C.V. graduated from Clark County High School and worked at Wright Patterson Air Force Base in Ohio, at age 19 he enlisted in the U.S. Army in the Criminal Investigation Department, and was stationed in the Philippines. He attended the University of Kentucky where he earned his Juris Doctorate degree in June 1951, practicing law for more than 49 years. C.V. had a love for thoroughbred horses; from raising them to racing them at his beloved Barrister Hall Farm. C.V. lived life to the fullest and loved to hear a good joke as much as he liked telling them. You could always catch him singing a good song. C.V. was a loving husband, father, grandfather and friend. He is survived by his wife of 29 years, Alice; daughter, Mary Edith (Ty) VanDeGrift; son, Brian (Chelsea) Collins; grandchildren, Grace and Amery VanDeGrift, Trey (Jenna) VanDeGrift, Macy and Kevin Collins, Keegan May, Kenlee Casey, and Riley Trent. Services were held 10:30 AM Friday, September 3, 2021 at Kerr Brothers -Harrodsburg Road by Bro. Tom Gold, with burial following in Hillcrest Memorial Park. Visitation was 5-8 PM Thursday at the funeral home. Pallbearers were Brian, Kevin, Ty, Trey, Keegan, and Kenny. Honorary pallbearers were Grace, Amery, Macy, and Kenlee. In lieu of flowers contributions are suggested to the Wounded Warriors.