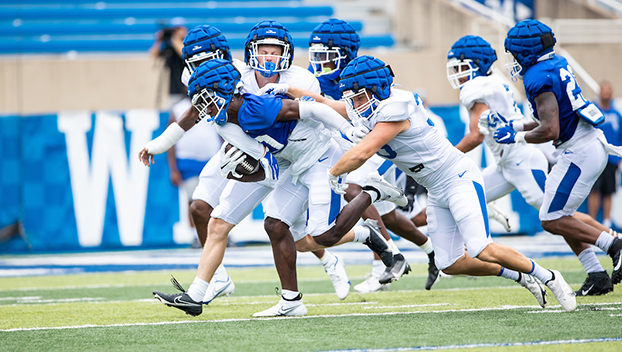 Freshman receiver Chauncey Magwood says his speed and strong hands are reasons he could have a chance to play this season. (UK Athletics Photo)

“Coming into ninth grade I was not expecting that. Playing in summer camps I stepped it up, somebody got hurt and I ended up being one of the receivers. It prepared me for this,” Magwood said.

Coen was impressed with the way Magwood worked to learn the playbook during the summer and he has continued to impress in practice to where he likely will be in the playing rotation Sept. 4 against Louisiana-Monroe.

He says what he went through as a high school freshman has helped him at UK.

“You have players from all over the country and I have to work to be in a position to play. If I don’t put in the work, I am not going to play. I get that,” Magwood said.

“My (high school) coach talked to me and said Lynn Bowden did the same thing his last year (at Kentucky) to help the team by moving to quarterback,” Magwood said. “We ran a lot but I didn’t run a lot myself like Lynn Bowden did. We had a great backfield and our coach didn’t want other teams to just expect me to run.”

Magwood was still ranked as one of the nation’s top 100 receivers in his recruiting class by ESPN and Rivals despite not playing receiver in 2020.

“Speed. I have strong hands,” Magwood said when asked what makes him a good receiver. “I was a quarterback last season and have not caught balls for a year and had not been working on catching a whole year.

“But one of my best things is I have strong hands and I am quick off the line. I am trying to get back quick off the break like I was in high school.”

“That got me here and now I love coach Coen,” Magwood said. “Look at the wide receivers he helped coach with the (Los Angeles) Rams. He is the best coach I have ever been around.”