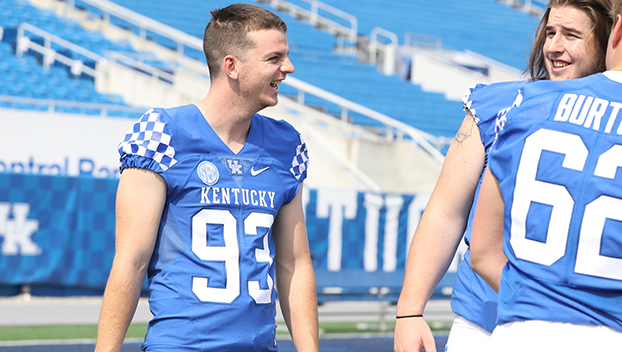 Wilson Berry, left, expects to have fun with his younger UK teammates and is not intimidated following All-American Max Duffy.

Not only is Kentucky’s new punter a 24-year-old Australian but he also has a nickname — “Bangers” — that comes with an interesting story.

“When you hear a good song you say that is a ‘Banger.’ I was on a footy (football) trip and we were on a bit of a party bus,” said Wilson Berry. “I was at the front of the bus and I had control of the tunes. Someone was like, ‘That’s a banger,’ and it has just rolled on since then. That is also my Instagram handle if anyone wants to follow it.”

Witty, charming, and older just like Australian Max Duffy was during his All-American career at UK that ended last season.

Will Wilson get a chance to be on the front of a UK football party bus controlling the tunes?

“I sure hope so. Hopefully (UK coach Mark) Stoops is giving us some bourbon as well,” Berry said.

Not sure about Stoops passing out bourbon on a UK football party bus but Berry certainly could help the Wildcats control field position much like Duffy did. Berry’s older brother, Jordan punted at Eastern Kentucky University and is entering his seventh season with the Pittsburgh Steelers where he has averaged 44.4 yards per punt on 385 kicks.

The Berry brothers and Duffy all were with ProKick Australia that helped place them with American college football teams.

“Obviously my brother is pretty renowned for his pro-style punt and Max had such great years here. It’s good for me to get that mix of flavors and experiences. Any advice is good advice at this point and I am ready to go for it,” Berry said.

One recruiting service ranked Wilson Berry as the No. 3 punter in Australia and No. 7 overall punter in the 2020 recruiting class. He played three years of Australian Rules Football for Essendon in the Victorian Football League.

However, he knows going into this season he’s either known as Jordan Berry’s brother or the player following Duffy.

“It is what it is. It is a good problem to have. It means the others have had success,” the UK freshman punter said. “ In terms of my thing I will hopefully make my own run at it and people will see my own path and hopefully recognize me for that in my career here.”

His previous career included working as an assistant manager for Grill’d Burgers — a sort of middle-class restaurant according to Berry.

“We had great burgers on the menu. We had one called Mighty Melbourne. I think it is the best burger in the world,” he said. “It has relish as the base. It has mayo on top of the bun and then has a full salad plus pineapple is what I would put on there and that also includes egg, bacon, cheese and obviously a beef patty.”

He joked that he had told chefs at the UK football facility to give him the cooking tongs to fix the burgers for the team.

“I am ready to go at it. I am sure they will loosen up after a while and give me a go,” Berry said.

He could probably teach his younger teammates a lot of other tricks. He’s 24 and six years older than a lot of his teammates.

“I do have to adapt to everyone being a bit younger. I think it is a good experience,” Berry said. “Having played in another country and coming here I feel a little more settled and hopefully can give advice to the younger guys as well.”

But what about the best advice he’s said he ever received — life’s uncertain, eat dessert first.

“It used to be my older brother that would always tell us that one at the dinner table and it just sort of stuck,” Berry said. “That’s it. Enjoy life for what it is each and every day, and enjoy the dessert. I am looking good and ready to go.

That’s for sure. Cheers.”

Bingham to get early taste of playing in Lexington