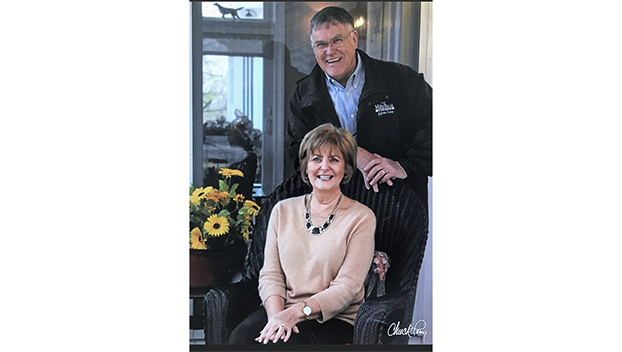 Nicholasville Realtor Jonah Mitchell is has announced his intent to file for the 22nd Senate district seat recently vacated by the death of Sen. Tom Buford.

Mitchell, a life-long Republican who has lived in Jessamine County for 32 years, said he was encouraged to get into politics by Buford. Mitchell said he and his wife, Donna, have been friends of Buford and his wife, Carol, for years.

“We are still dealing with the loss, but I have talked many times to Tom about politics, and he has encouraged me to get into politics,” Mitchell said. “I want to protect the legacy of Tom Buford’s vote. He knew how to listen to his constituency and how to serve.”

Mitchell has spent the past 45 years in the real estate business and owns Jonah Mitchell Real Estate and Property Management in Nicholasville. He said Buford went with him to the bank to get his very first business loan many years ago. “There have been a lot of wonderful people working with me over the years,” Mitchell said of his business success. “We have had the most wonderful independent realtors and employees.”

Those years of success in business paired with his community service have created the building blocks Mitchell says will make him successful in this race.

Mitchell said leadership is needed to continue dealing with the Covid 19 crisis and the impact that will follow. Mitchell points to three main areas which he believes will need the legislature’s attention during his first legislative session, if elected –  the Governor’s use of executive orders, the state budget and redistricting.

“We cannot stand another inflationary period,” Mitchell said, adding that the pandemic has impacted every facet of everyday life, including the price of housing and the price of hamburger. “We want to protect everything we can for the small business person in our communities. That’s one of our biggest concerns.”

The impact of the pandemic on education is another area Mitchell says will need more attention in coming legislative sessions.

“We need to look at the issues we are coming up in education – including the (Centers for Disease Control) mask recommendations,” Mitchell added, noting that his wife retired from Warner Elementary in Nicholasville after 32 years of teaching.

Gov. Andy Beshear has not yet issued an order setting a date for a special election to fill the reminder of Buford’s term. After the call is issued, representatives of both the Democratic and Republican parties in the five counties of the district will meet to select nominees to run in the special election.

In addition to his real estate business, Mitchell has taught a real estate course at the University of Kentucky’s Gatton School of Business for more than 10 years. He has served as president of the Lexington Dream Factory, and the Jessamine County Chamber of Commerce. He has also served as chair of the Jessamine County Board of Education’s Local Planning Committee and as a member of the Bluegrass Community and Technical College’s Advisory Board and the Board of the Commission on Proprietary Education.

Mitchell previously ran to represent Nicholasville in the State House of Representatives.

“I have served in many roles – as a community leader and as a business owner – that have allowed me to lead and to give back,” Mitchell said. “My life’s ambition is to be a servant leader, and I’ve done that. I’ve had the opportunity to meet so many people, and I had the privilege to be a friend of Tom Buford.

“My experience speaks for itself,” Mitchell added.

Mitchell and his wife Donna have one son, Jason, who graduated from West Jessamine High School and now lives in New Orleans with his wife, Julie. Jason Mitchell served more than 11 years in the Army. Jonah and Donna Mitchell’s grandchildren, Caitlin and Aubrey, frequently spend summers in Kentucky with their grandparents on their Jessamine County farm.

“I’m an old-fashion conservative who believes in God, country and family,” Mitchell added. “That’s who I am.”

The 22nd Senate district is comprised of Jessamine, Garrard, Mercer and Washington counties, along with a small portion of southern Fayette County. Buford represented the district since he was first elected in 1990.

Goodwill Industries of Kentucky is hosting a statewide hiring event on Thursday, July 22 from 10 a.m. to 1 p.m.... read more