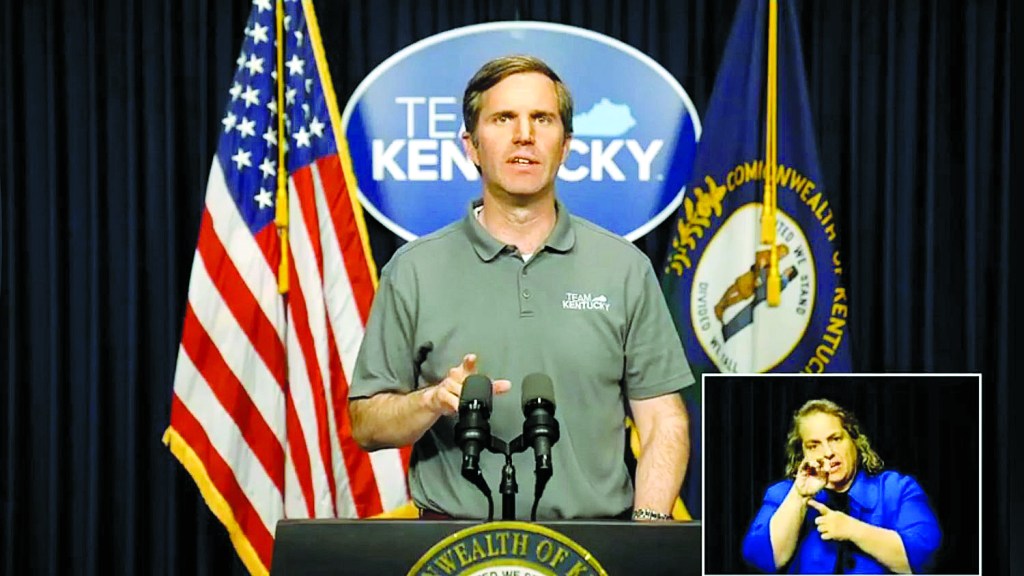 Gov. Andy Beshear’s regular press conferences about the coronavirus “provided a steady source of information, comforted some people and annoyed others and inadvertently spawned memes, merch and ‘Govern Me, Daddy’ jokes that caught fire online,” writes Morgan Watkins of the Louisville Courier Journal. “But through it all, they also gave a grim, running tally of the virus’ death toll in Kentucky. Beshear read out the latest deaths, day after day, and in brief moments those losses choked him up with a grief he didn’t hide.”

And it’s almost over. Beshear says Friday’s pandemic press briefing will be his last. It will coincide with the end of the mask mandate he started 11 months ago, but “This is probably the most significant — from a perception point of view — sign that it’s over,” said state Senate Majority Leader Damon Thayer of Georgetown, one of the Democratic governor’s leading Republican critics.

Beshear “started the briefings with two main objectives: to inform Kentuckians how to keep themselves and others safe, and to encourage people to come together and not panic,” Watkins reports. He told her, “I think, in the very least, it was an informative, calming collective experience for all of us.”

Thayer and Agriculture Commissioner Ryan Quarles, a Republican who may run against Beshear in 2023, “contended his briefings served a purpose at first but lasted far longer than they should have,” Watkins reports. Quarles “indicated Beshear’s talk of unity, exemplified by catchphrases like ‘We will get through this together,’ gradually grated on some people who were hurt by his executive orders or upset by his lack of cooperation with GOP officials.”

“For at least the past half-year, the ‘Team Kentucky’ rhetoric that you hear every day at the press conferences did not match reality,” Quarles said. “Team Kentucky” was the motto of Beshear’s 2019 election campaign and will remain the branding device for weekly press conferences to come.

Beshear gave briefings daily at first, prompting reporters to call them “Andy Time,” then less frequently. He slowed too late, Thayer said: “He actually became more irrelevant because there was no urgency … There wasn’t news every day. Frankly, he became like the teacher in Charlie Brown’s classroom — just a lot of noise that nobody was really listening to.”

Beshear “dismissed the notion that the briefings were politically motivated,” Watkins writes, quoting two public-health researchers at the University of Kentucky who gave the governor high marks.

Sarah Vos, a lecturer in the College of Public Health, “indicated Beshear’s briefings were pretty effective at providing useful data,” Watkins reports. “She said he gave out the latest numbers on coronavirus cases; modeled the behavior he was asking people to adopt, such as mask-wearing; and explained his reasoning for various decisions.”

Anna Hoover, a UK public-health professor, said Beshear did the best job of any governor she saw in following the Centers for Disease Control and Prevention’s six principles of crisis and emergency risk communication: Be first; be right; be credible; express empathy; promote action; and show respect.

Hoover said Beshear’s events “did an especially good job of expressing empathy by acknowledging the myriad ways people were hurting and the lives lost,” Watkins writes. “While Beshear’s press conferences generally stayed centered on Covid-19, Hoover noted it wasn’t unusual for them to address unrelated topics. (To be fair, sometimes that was because reporters asked about other issues).”

Hoover said, “The further afield the press conferences got from the Covid issues, the focus got a little blurry sometimes. And it also opened those press conferences up to, I think, more criticism from other folks that perhaps they were being used for ways other than public-health information.”