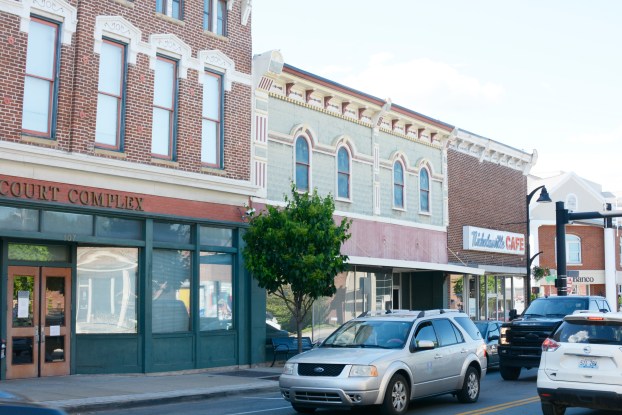 The Jessamine County Fiscal Court owns this block of buildings on Main Street that includes the circuit clerk's offices, district courtrooms and the Nicholasville Cafe. It could be the site of the new judicial center. (Photo by Randy Patrick)

Board considers sites for judicial center

Nicholasville Christian Church (Disciples of Christ) and a row of buildings on the west side of the 100 block of North Main Street are two of the sites being considered for a new state judicial center.

Last Wednesday, the Project Development Board met in person at the circuit courtroom of the old Jessamine County Courthouse and heard a presentation from former County Magistrate Bobby Day Wilson on behalf of Nicholasville Christian Church.

Wilson said the church is looking to rebuild somewhere else and wants to sell its property. One of his recommendations, he said after the meeting, was to use the building as the new courthouse rather than demolish it. The church could also sell its parking lot nearby.

Another option the board has discussed is the block of buildings the county already owns on the west side of the 100 block of North Main Street. Part of that property is already used by the Jessamine Circuit Court Clerk’s Office and Jessamine District Court, and there are two other buildings north of that, one of them the home of Nicholasville Cafe.

The board scheduled a virtual meeting at 5 p.m. Wednesday, May 19, most of which would be in closed session, to discuss possible property acquisitions.

The new building would be owned by the Fiscal Court and leased to the state courts. West has said the court system and county offices have outgrown the old courthouse.